Yes, I know Bangkok isn’t in Myanmar! Our connection in Bangkok from Hong Kong to Mandalay was too short and we missed our flight. Quite disappointing, but we rallied and stayed the night at a hotel previously recommended by our Bhutan tour guide. There, we enjoyed our first real street food, and I had an excellent massage. 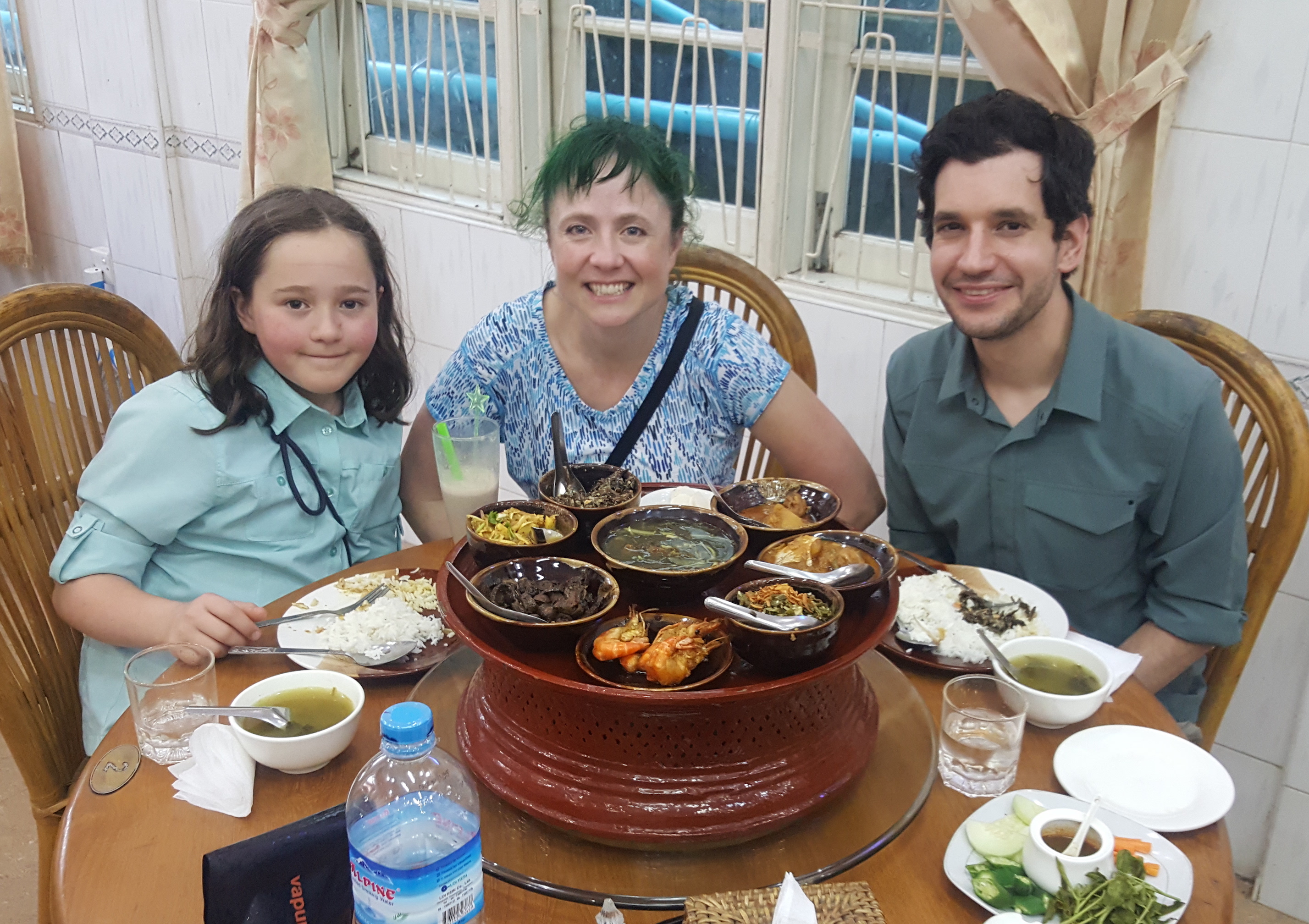 In Mandalay, we ate a dinner of traditional Burmese salads and curries, and as you heard from Ruby, the next day we took a cooking class to learn how to make those dishes. It was more than just a cooking class; it was a full-day adventure that gave us a local’s view of Mandalay. Our guide took us to a market to shop for ingredients, then we stopped at a tea shop for ‘second breakfast’. Tea shops are the center of Burmese culture, but hard for a foreigner to navigate alone because English is rare. With our guide along, we were able to sample everything (with an explanation).

Next we were taken to a beautiful indoor/outdoor cooking pavilion and each made six delicious Burmese dishes ourselves. It was way too much food, and so good we stuffed ourselves until we had to stop. Luckily, then it was naptime!

Later in the afternoon, we took a bicycle ride around the countryside. Ruby intrepidly handled a bike that was too big for her as we rode past fields and villages. We then ended our day atop a scenic hill at an interesting monastery watching the sunset.

As we had heard, Mandalay is hot and dusty. Whenever we returned to our sweet air-conditioned room (a 4-person hostel dorm reserved just for us), it was a visceral relief. 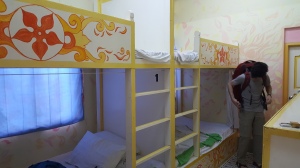 So, our third and final day in Mandalay was mostly a “business day” where we relaxed in our room and caught up on photos, email, blogging, etc. In the evening, we watched some of an elaborate fountain show in the moat surrounding the royal palace. There were many different types of jets, colored lights, and synchronized music. Ruby was rapt. 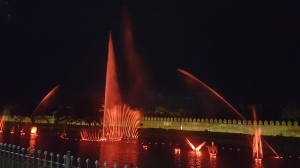 We ended our visit with a Moustache Brothers show. It’s hard to explain the Moustache Brothers, but if you’ve seen the Moisture Festival in Seattle or hung out with a circus family, it would have felt familiar. This family-run show consisted of an MC (one of the Brothers) joking and ranting about the previous military regime, interspersed with pieces of Burmese dance (some serious, some comic). The vaudevillian feel was mixed with a sense of horror about the treatment of the Burmese people over the last decades. The Moustache Brothers themselves were imprisoned for six years for joking about the government.

Things in Myanmar seem to be improving politically now. Our guide felt comfortable talking about Aung San Suu Kyi in a tea shop (former hotbed of government informers), and at a temple we saw her on the cover of several publications for sale.

Myanmar is amazing. Yesterday we went on a cooking class. It was really fun. We made too much lunch to eat. We made rice balls in palm sugar syrup, tea leaf salad, chicken curry, vegetable curry, string bean salad, and tempura. I barely even made a dent in it! Last night as we were getting driven home from the cooking class, we drove next to the water show at the palace. It was pretty cool. We’re probably going to go back tonight and watch it and actually visit the palace.

This is what we made for lunch (not the rice though) 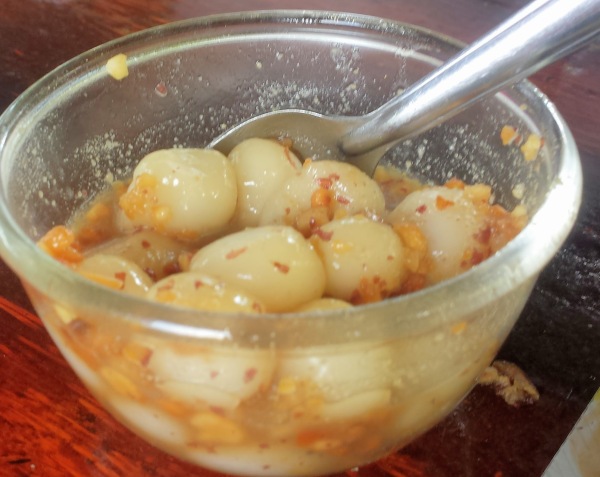 These are the rice balls in palm sugar syrup!

Hong Kong was a great first destination for us. Ruby said it was like the tutorial level of the trip, which I think is very accurate. Every sign was in both Chinese and English, most people understood English, and the city services were top notch. Kate says it’s the best bus system she’s ever experienced. We all had an excellent time.

We arrived at our hostel (YesInn at Causeway Bay) late at night after more than 25 hours of being awake, a record for Ruby. The first few days we were pooped by late afternoon but still managed to have some fun.

Our first destination was Victoria Peak, a breathtaking viewpoint overlooking the city. While there we stopped at the Trick Eye Museum, a series of forced perspective murals that made for excellent photographs (you can read more about it in this post by Ruby). The Hong Kong Science Museum was also great with lots of interactive exhibits and a pleasantly perplexing mirror maze. END_OF_DOCUMENT_TOKEN_TO_BE_REPLACED

Yesterday we went sailing, and there were little jumping fishes! They were too fast to take pictures of, but I have one of Grant sailing. They were jumping pretty far, so me and Mama were wondering if there was a predator chasing them, and what it was. 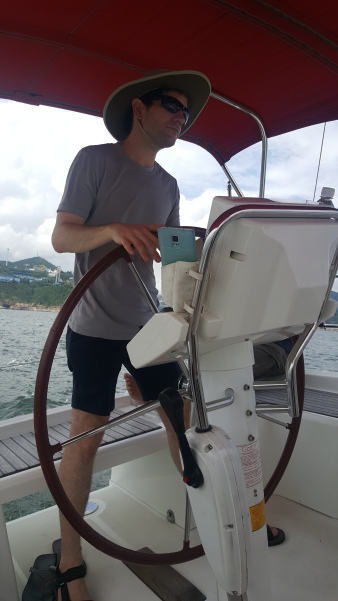 It was really fun! (There was a possibility of us scaring them up though!)

Today I also got some pet eggs, also called Gudetama. (We don’t know how to pronounce it.) They are SUPER cute! One has a mustache and the other has a blanket made of bacon! The one with a mustache is my favorite.

We started working on the packing list in earnest in April. After finding inspiration from a few sources (Lonely Planet, One Bag, Wirecutter) we came up with a spreadsheet. We have one column for each person plus a daypack, shared items, and a few other lists like toiletries and first aid.

One of the earliest choices to make was luggage. Suitcases are great in airports and cities, but we were planning to visit some pretty rural areas, places where wheels wouldn’t work. Backpacks seemed to make more sense. After some test fits at REI, we all independently selected Osprey Farpoint packs as our favorites. Kate got the Farpoint 55 with attached daypack and Ruby chose the Farpoint 40, which fits her surprisingly well.

I initially got the Farpoint 70, but after a packing test (with towels standing in for things I didn’t have yet) concluded it was just too big. You don’t really need much stuff! Three outfits and a toothbrush. In the old days books were a heavy burden, but now we have Kindles. So I ended up with the Farpoint 55 too.

Kate, Ruby, and Grant’s packs being tested for the correct volume

Of course we’re carrying more than the bare minimum. After many reviews read, packing lists brainstormed, Amazon boxes opened, and REI shopping bags filled, here’s all the stuff we decided we couldn’t live without for 3 months:

END_OF_DOCUMENT_TOKEN_TO_BE_REPLACED

Greetings from the future!

We’re in the future, but only by one day. The time zones make it so that we are ahead by about 15 hours. Yesterday we went to the Trick Eye Museum and it was so cool!!! We posed in pictures which is what you’re supposed to do there and some are pretty funny. There are some with levitating and some with statues you can pose with for the picture, and most of them had 3-D looking pictures.

For more pictures, click here. Hint: look at them with one eye because then they’ll look more real.

Planning this 3-month trip for three people was not an easy task. Not only did we have to prepare to travel, we also had to find sub-tenants and partially move out of our house for the summer to accommodate them. We started the planning process in January and began by making a high-level timeline to reassure ourselves it was possible.

After that, we tracked our to-dos in Trello, which was (and still is) an essential tool for us. The great thing about Trello is you can start using it very casually, and later can easily shift to a more detail-oriented approach. We set up a board for our trip with one list for each item on the timeline, and a card for each to-do item in that category. Closer to departure we created a list for every week, and just before leaving we had a list for every day. Now that we’re on the road, we have a list for each country and one for when we return. As we think of something we want to remember, we toss another card in the right list. Trello is easy to use and great for collaboration. (We also use it to track our everyday household tasks, and planned our wedding celebrations with it too.)

Our research was created in a shared Google Drive folder. Some items we created:  END_OF_DOCUMENT_TOKEN_TO_BE_REPLACED

We am on the train to Vancouver, and the scenery is beautiful. We were by the sea but now we are passing farmland. We had breakfast on the train and I got a parfait and a breakfast bagel.

On the trip I will miss family and also Maia. I am looking forward to seeing interesting crafts and scenery. I am excited to always be in a hotel because I can have breakfast in bed every day!

We will be leaving for our big summer adventure on June 4th. In the meantime, here’s a map of our intended travels. We also made an interactive map you can play with.

To get updates from us by email, enter your email address in the sidebar and click the Follow button. 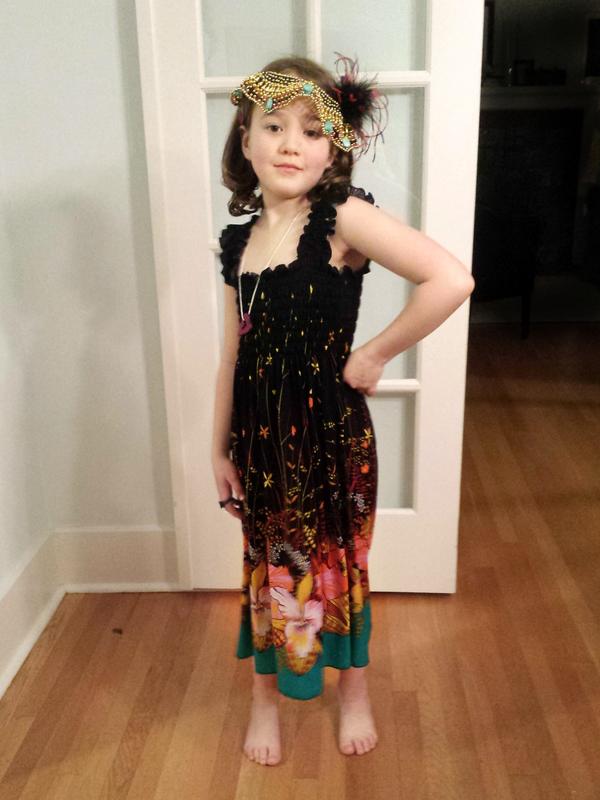 In 2008, shortly after she began talking, Steve and I started capturing Ruby’s funny quotes in a Twitter account (@areyoubewhy if you’d like to follow it). Here are the tweets from 2014 – all are her exact words.