Today for dinner Ruby and I made Ping Pong Soup together. The recipe is really easy: each person alternates, choosing one ingredient to put into the pot. Any ingredient in the kitchen is fair game. Cook for a while, then enjoy! Here’s what we made:

First, I chose some leftover turkey and bones and put them in the water to simmer.

Then Ruby picked grapes. She cut each grape in half and put them in a bowl.

Next, I chose some left over fried rice. Then Ruby picked noodles — I got some penne out of the cupboard.

I chose celery, and put half in with the broth and diced the rest. Ruby took a look in the fridge and chose pickles, cutting each one in half with her knife.

Next up, I picked seasonings: a mix of salt, herbs and spices from the cupboard. Ruby’s final choice, after another look in the fridge, was eggs. She cracked two eggs into a bowl and mixed them up.

My final choice was some frozen mixed veggies from the freezer.

We took the turkey bones out of the pot, dumped in the rest of the ingredients, and let it simmer for twenty minutes while building giant bridges out of blocks in the basement. Then we enjoyed it with pumpkin biscuits we made together last weekend.

The other night, we were having meatballs and rice for dinner. Ruby was really into the rice, so in between servings of rice, we encouraged her to eat some more of her meatballs. One of those times, she put a big bite of meatball in her mouth. Then, she deftly took it back out with the same hand (as she was lowering the hand from her mouth), palmed the meatball, then pointed across the room with her free hand and said “plant!” (indicating the daffodils we had talked to her about a few minutes before).

It was so smooth that it actually tricked me for a moment. I was very impressed with her combination of sleight of hand and misdirection. Maybe she’s got a future as a magician.

It seems like Ruby must have some Japanese blood in her somewhere. Many of her favorite flavors are Japanese, such as nori (seaweed), sushi rice, and edamame (soy beans); and she loves going out for sushi. So for Christmas, I bought her a pair of chopsticks. They’re kind of like a giant clothespin – attached at one end, with a spring to keep them open.

Tonight, I thought we’d introduce them to Ruby and let her have a try at using them. Our expectations were pretty low, but to my surprise, she mastered it right away! As soon as we figured out that she needed to hold the chopsticks in the middle (instead of at the end), she was able to pick things up, even slippery soy beans and tiny grains of rice.

She proudly shows off her new skill in this video (sorry it’s so dark):

Ruby likes to stand on a stool next to the counter and watch me cook, and I think that’s pretty awesome. Today I was making stir-fried vegetables, and I gave her a piece of raw carrot to eat. To my surprise, she ate it — she’s been fairly averse to raw vegetables all her short life.

This is good news, because her diet is generally pretty light on vegetables. It’s nice to have another option available to round out her nutrition.

Anyway, I gave her the carrot and said to her, “this is a carrot”.

I checked with Kate, and she has not taught her any carrot-bunny associations. So who is teaching her that carrots and bunnies go together?

(note: I don’t have a problem with it, I’m just curious about where she picks these things up)

Ruby’s culinary journey is progressing admirably.Â  She’s now got four foods under her belt: apples, bananas, rice, and avocado.Â  She’s particularly fond of bananas and avocado.Â  When I eat an apple, I give her the apple core to lick and suck afterwards.Â  And on our recent hike, she enjoyed eroding the end of a banana.

Her food-consuming skills have also improved to the point where she’s eating enough that she’s almost able to replace a milk meal.Â  She opens her mouth to receive the spoon, usually doesn’t extrude the contents back out again, and probably consumes about 1/3 of a cup over the course of a meal.Â  She also takes water from her sippy cup.

Now that Ruby’s food is acting as food, and not just a fun little learning activity for all parties involved, we need to start paying attention to nutrition.Â  As her repertoire expands I’ll have more options available to make sure she’s getting the vitamins, iron, and protein that she’s not getting from her current tableÂ foods.Â  I’m looking forward to adding a more wholesome grain than brown rice to her mix, some protein (beans? chicken?) and green vegetables (spinach!).Â  That should cover all the bases.

Of course, she’s still getting five square meals of breastmilk (or formula, occasionally) every day, so we don’t have to worry about tinkering with her nutrition too much for the time being.

We’ve been at the “pretty soon now” stage for feeding table food to Ruby for the past few weeks. After checking a garden book we realized that the tsugaru apples in our backyard were ripe in “late august”. So, today was the day! 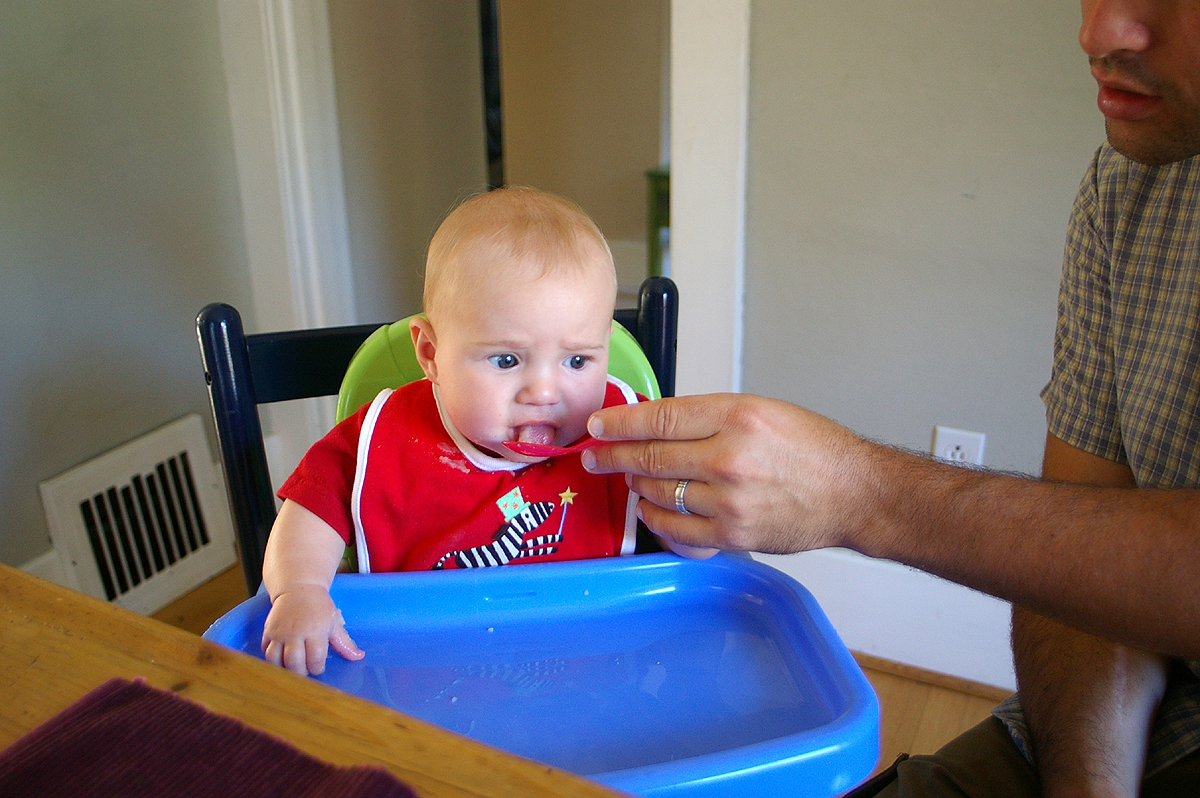 Ruby picked the apple and I diced, steamed, and mashed it. Kate squeezed in some breastmilk to thin it out a bit. We sat Ruby in her high chair and gave her a spoonful. She really seemed to enjoy it! It’s actually hard to say since so much ended up elsewhere than her mouth, but she was definitely reaching for the spoon and wanting more. She probably ate a half-tablespoon or so before getting tired of it. 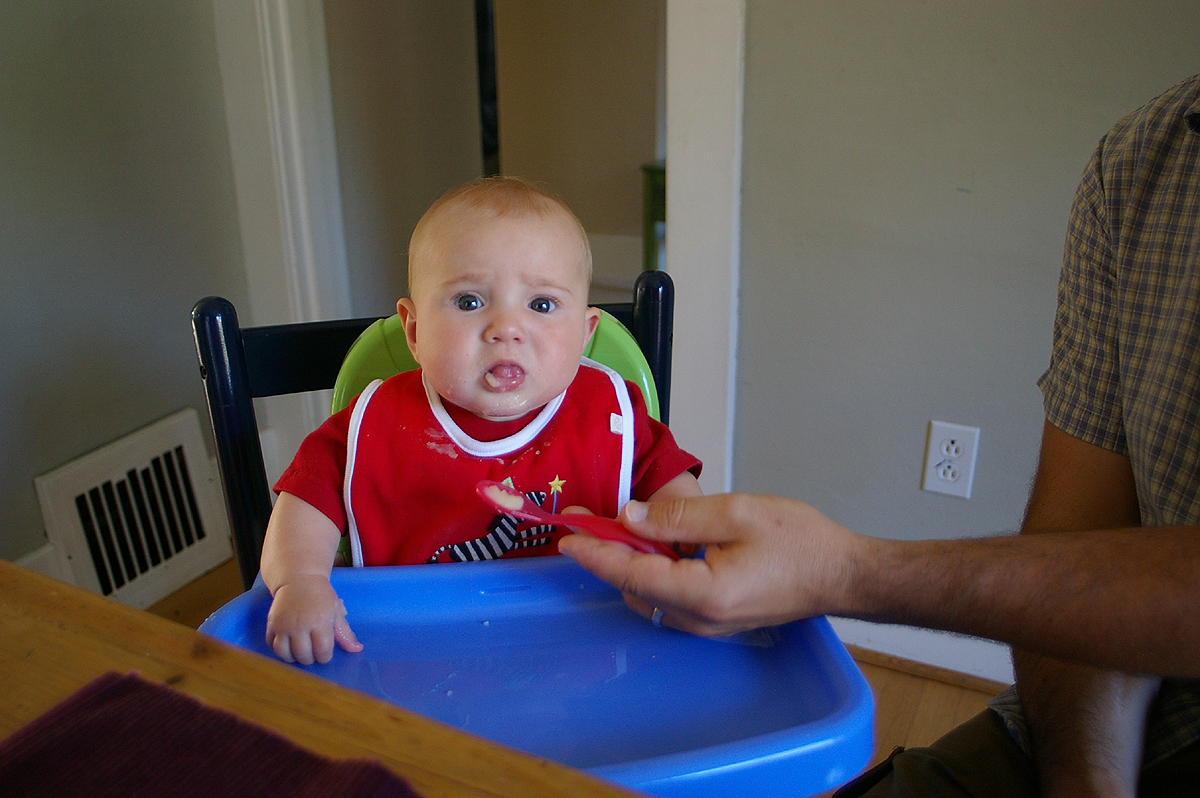 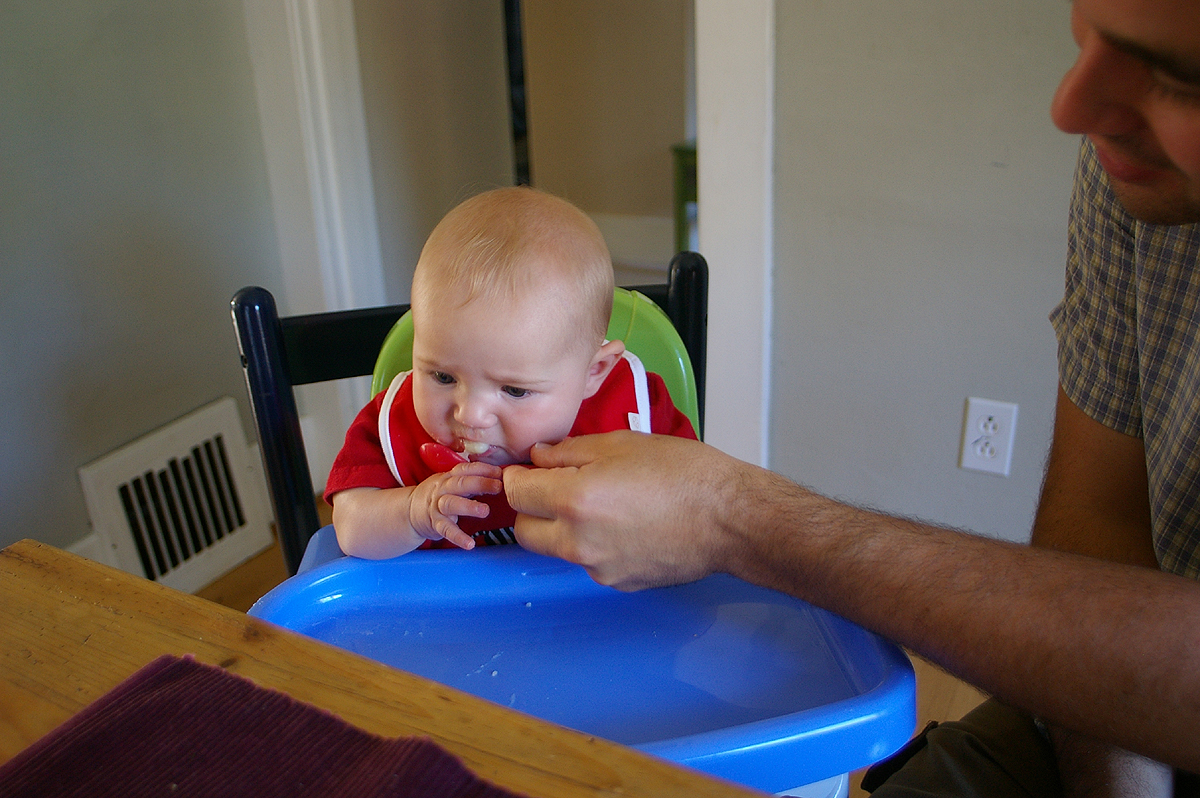 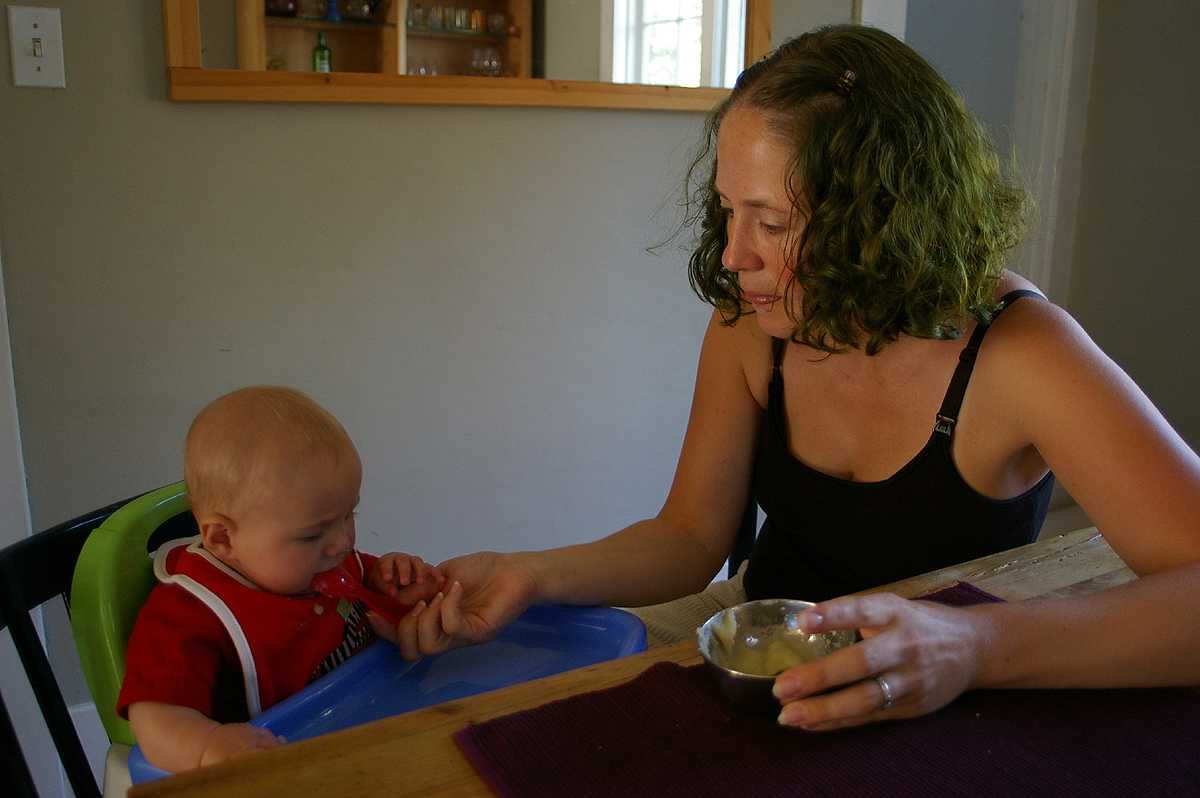 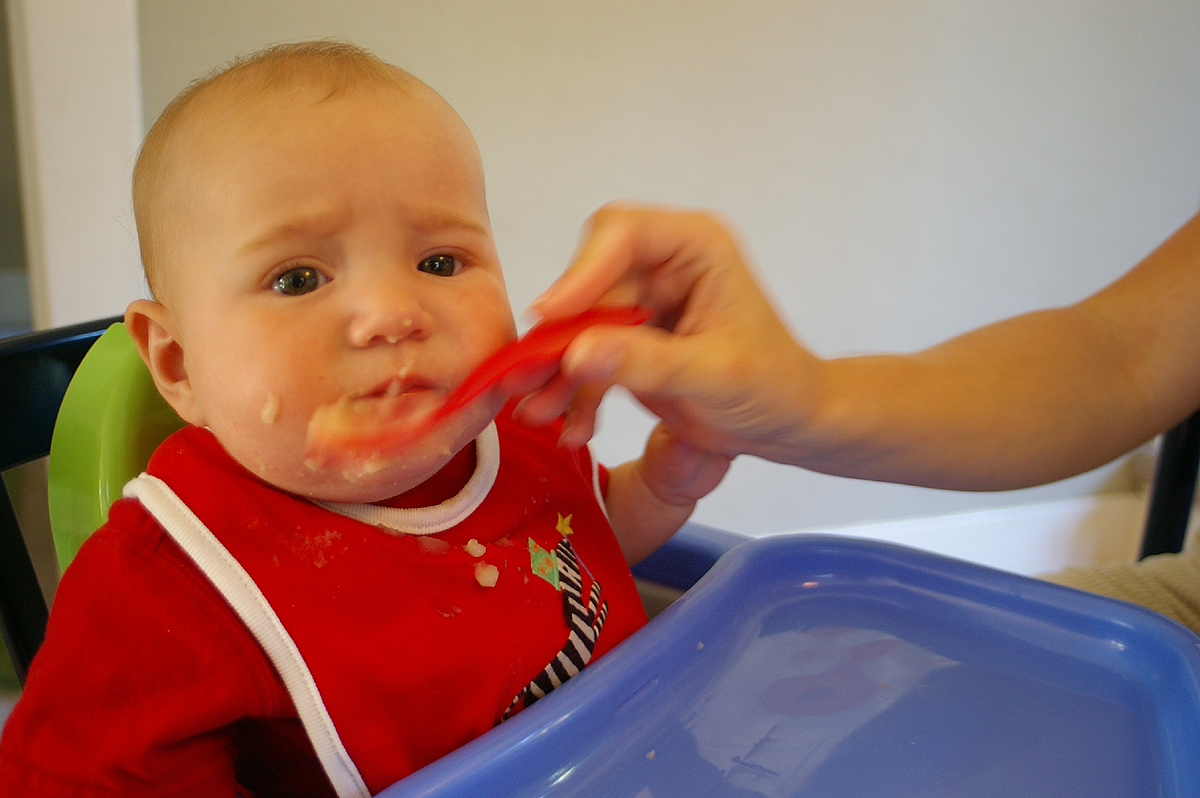 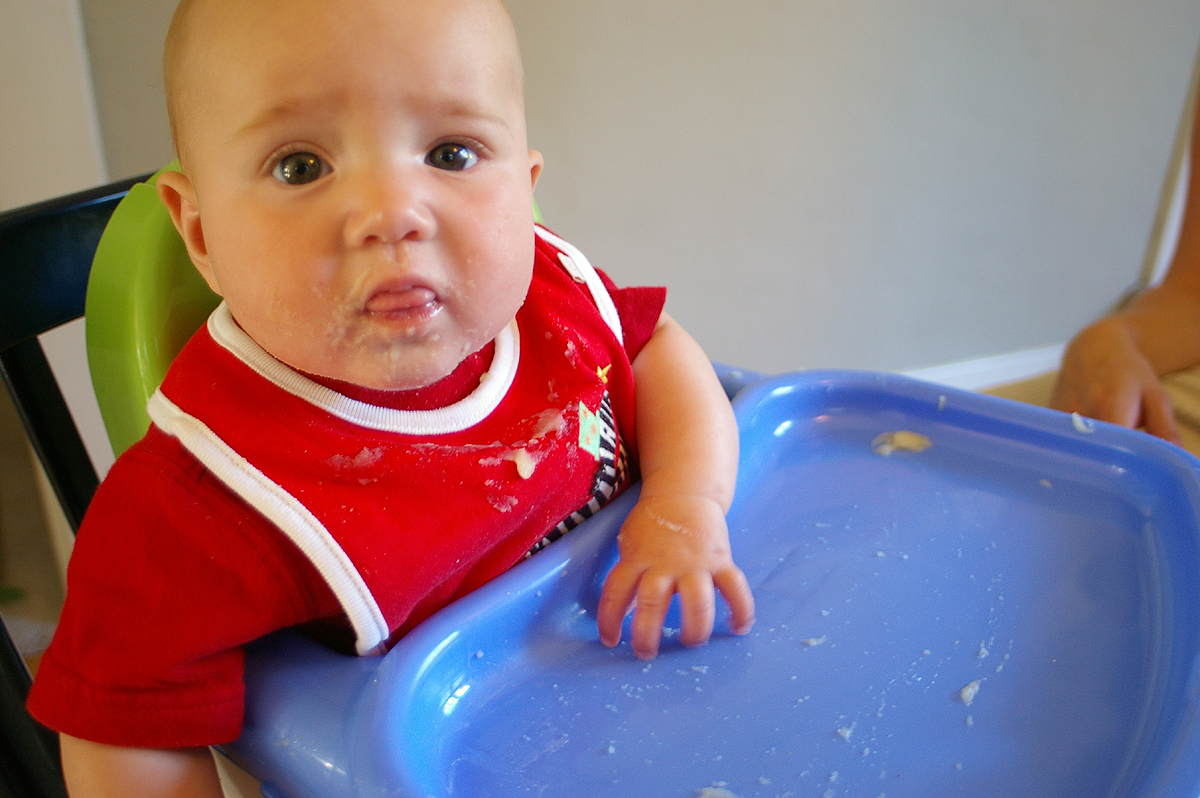 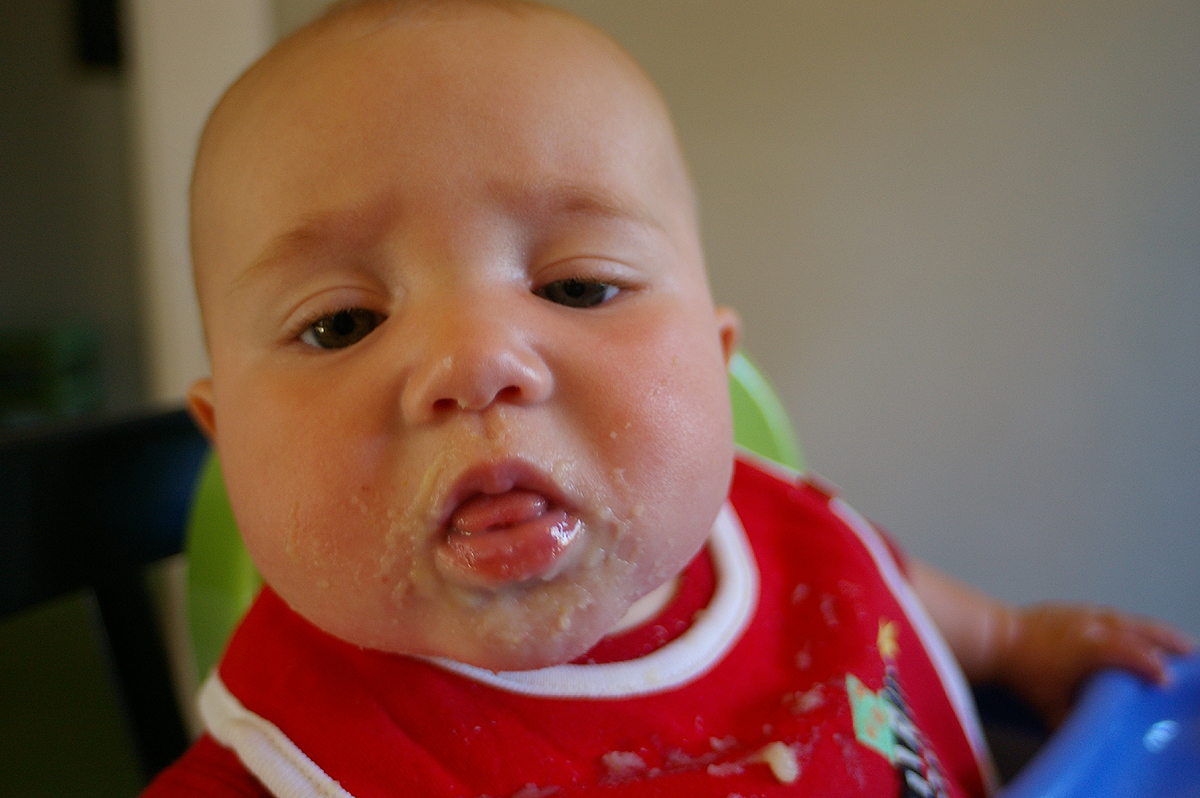