Visiting Mongolia feltÂ like a homecomingÂ for Kate. She spent 2 weeks there in 2004 and had been itchingÂ to return ever since. Ruby and I were excited to relive those memories with her and create our own. Since we only had 5 days, we couldn’t visit some of the more remote places like KarakorumÂ or the Gobi desert, but we made the most of our time by visiting two very different areas near capital city Ulaanbaatar. 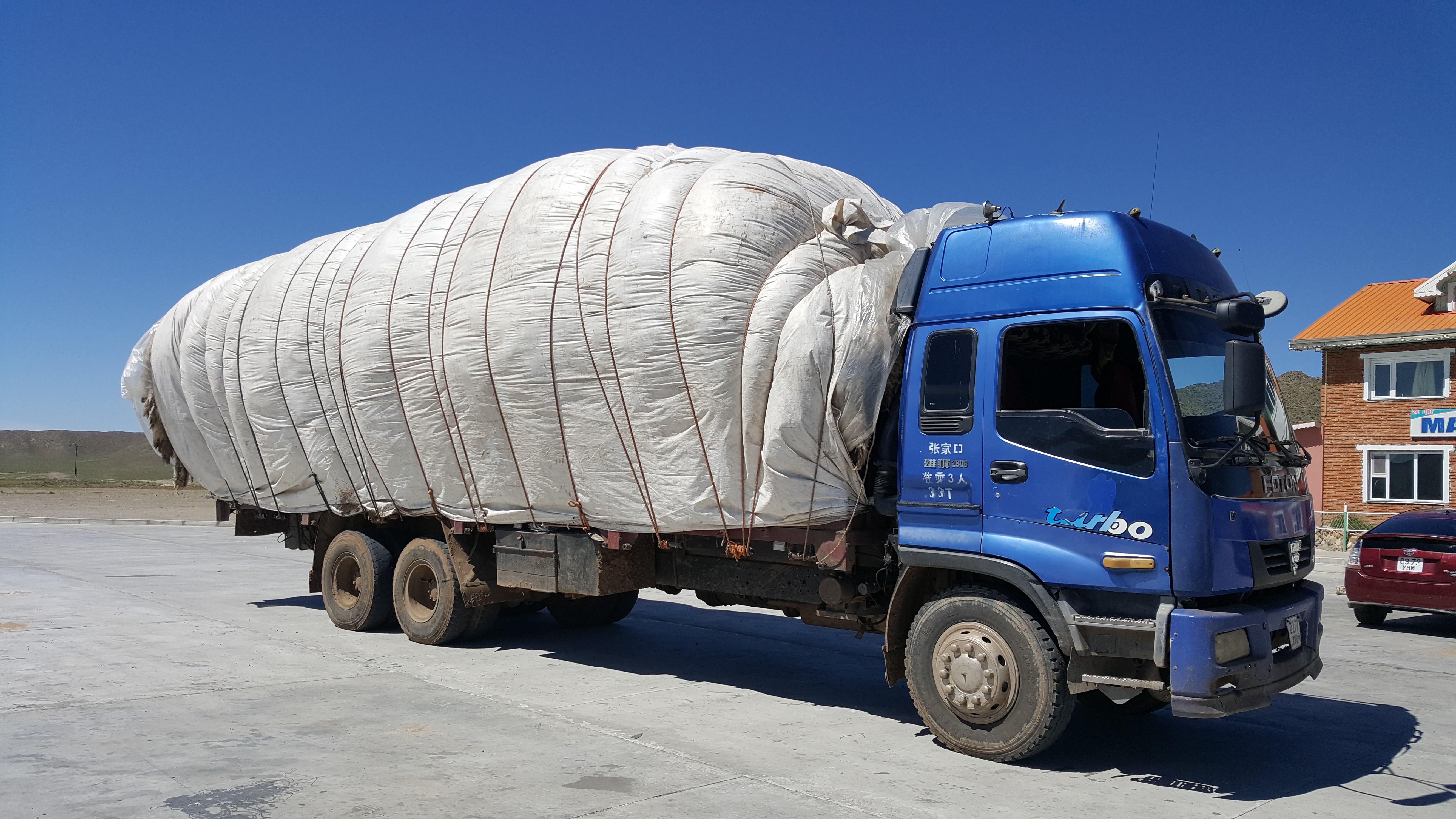 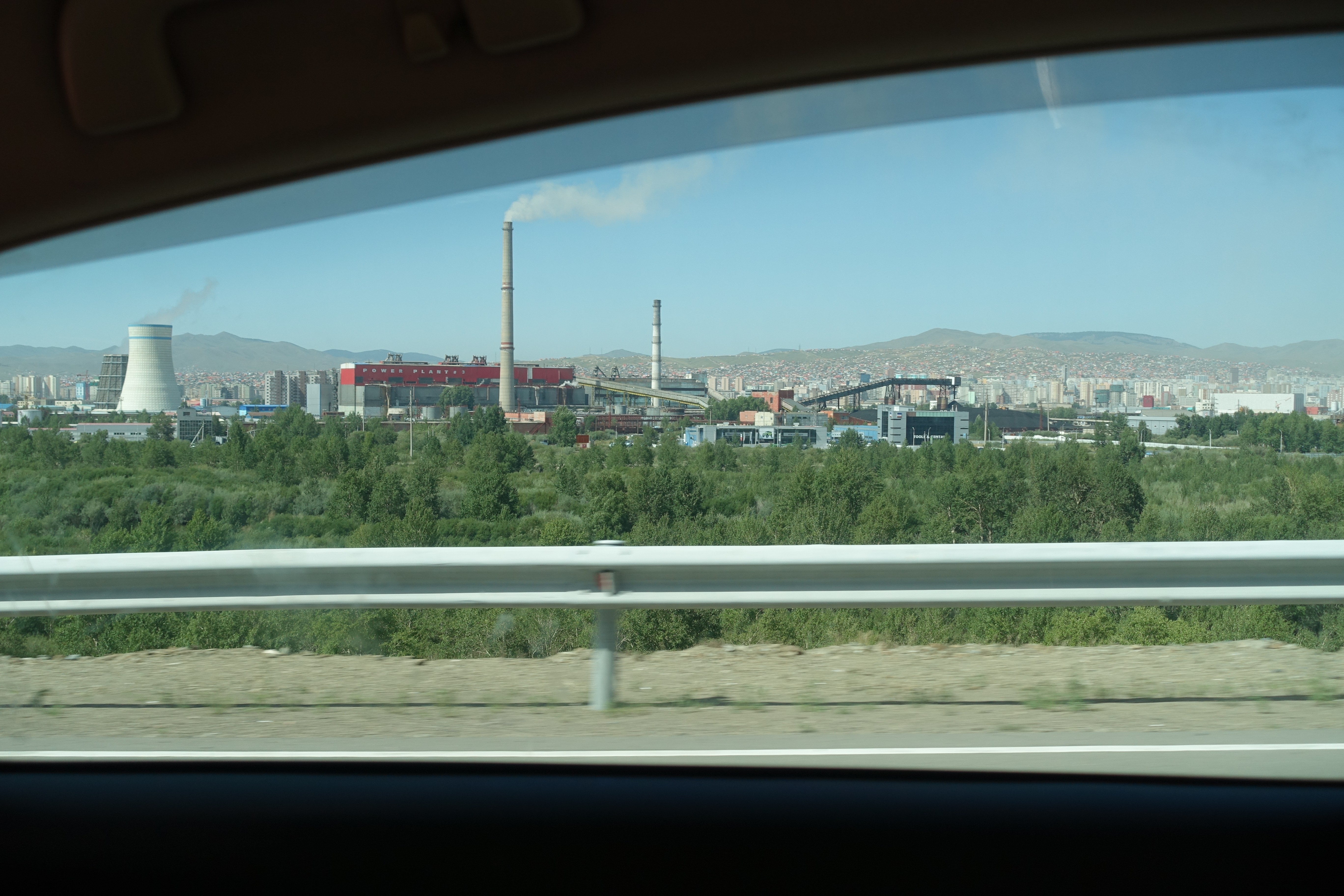 A coal power plant in Ulaanbaatar

After a day in Ulaanbaatar to adjust to the new time zone, we drove west toÂ Khogno Tarna National Park, locally referred to as “mini-Gobi” since it includes a small sand duneÂ separate from the actual Gobi desert. The dune is right off the main highway so it’s a popular tourist destination for foreigners and Mongolians.

A young Mongolian rushes to herd his flock near the highway

Upon arrival we relaxed for a bit in the ger of local camel herders, sampling their airag (fermented mare’s milk) and aaruulÂ (rock-hard camel cheese). I found the Mongolian airag smoother and less strong than the Kyrgyz version (kumus). It has a unique taste, like fizzy yogurt or yogurt beer.

Relaxing in the ger

We then mounted Bactrian camels and took a ride around the dune. Unlike horses, the camels sat down for us to mount them, then stood up in a surprisingly unsettling motion. Since their two humps formed a natural saddle shape, they were saddled only with blankets, allowing the rider to feel the spine of the animal moving underneath. Also unlike horses, camels are very noisy. 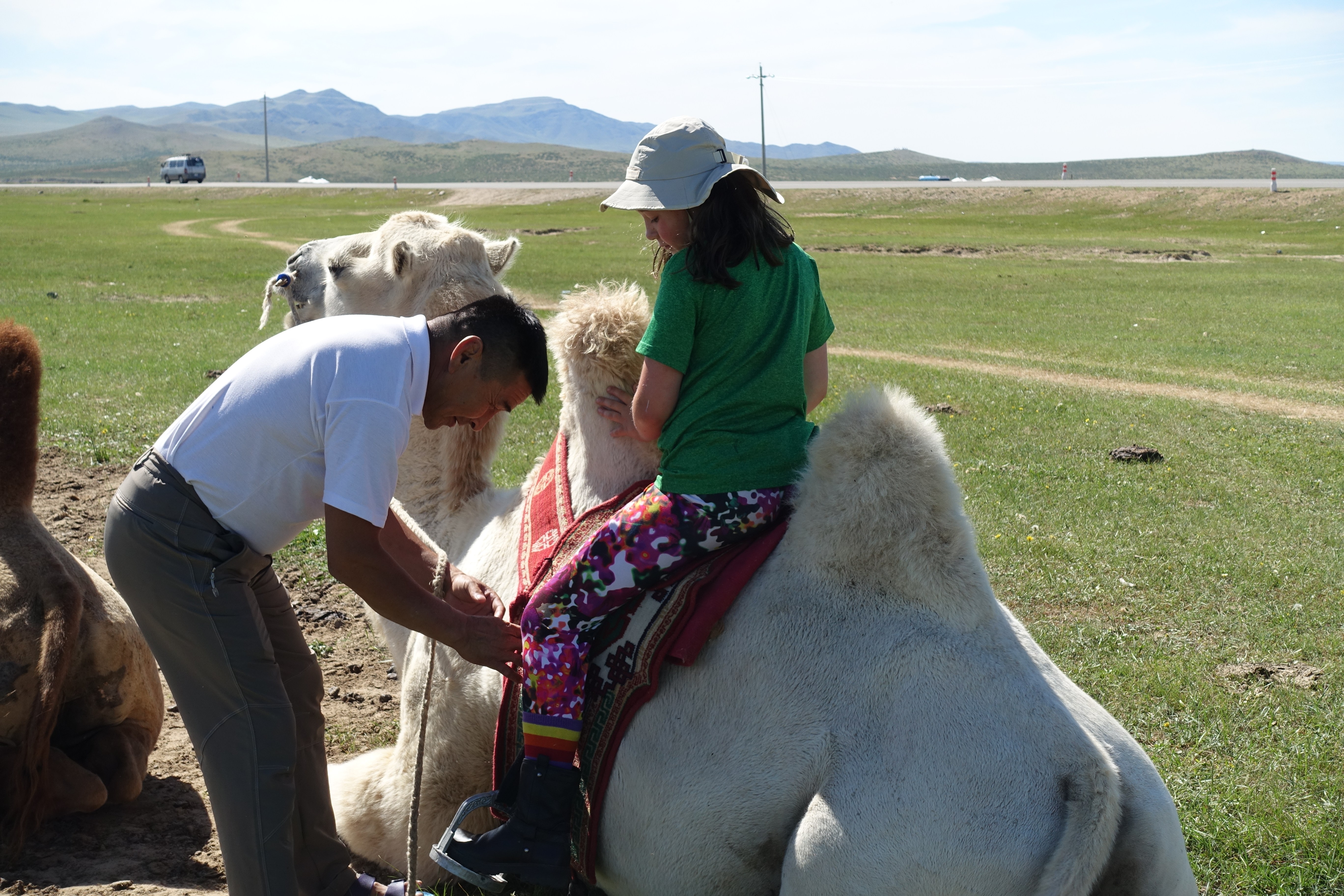 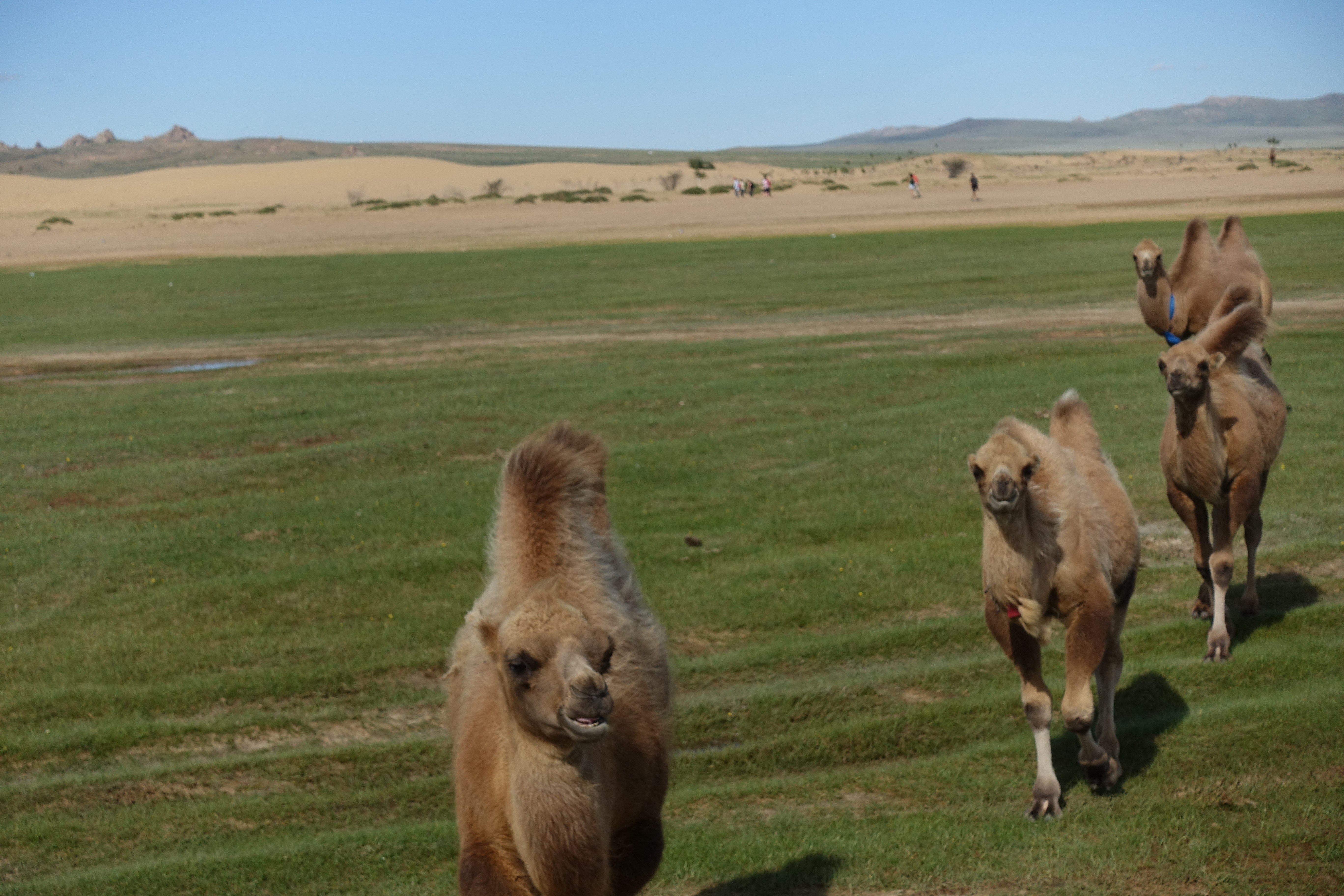 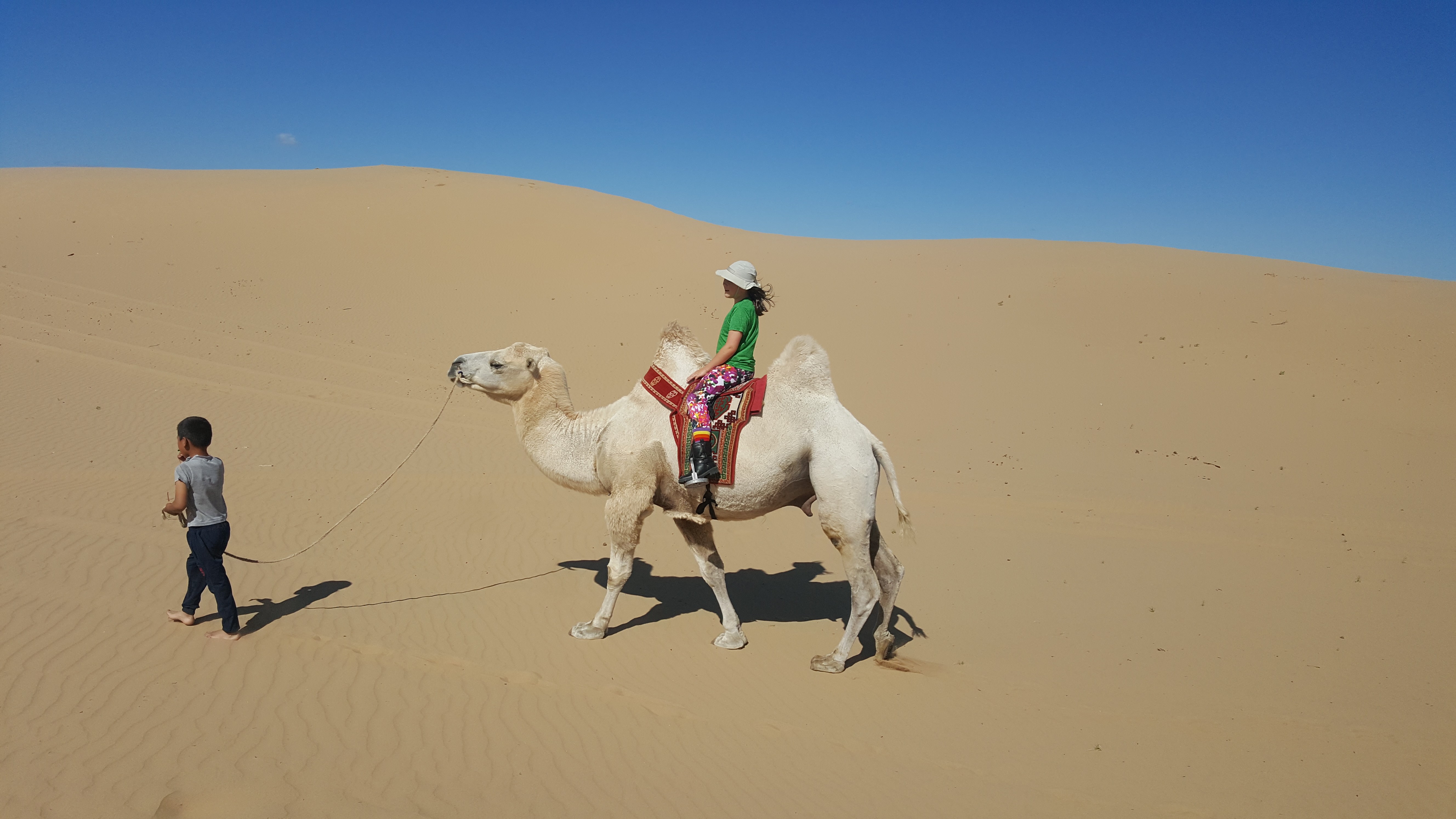 After the camel ride we climbed to the top of the dunes and sat for a while. Ruby loved playing in the sand and I found the wind’s effect on the sand very interesting. The Mongolian tourists (and Ruby) especially enjoyed rolling down the slope. 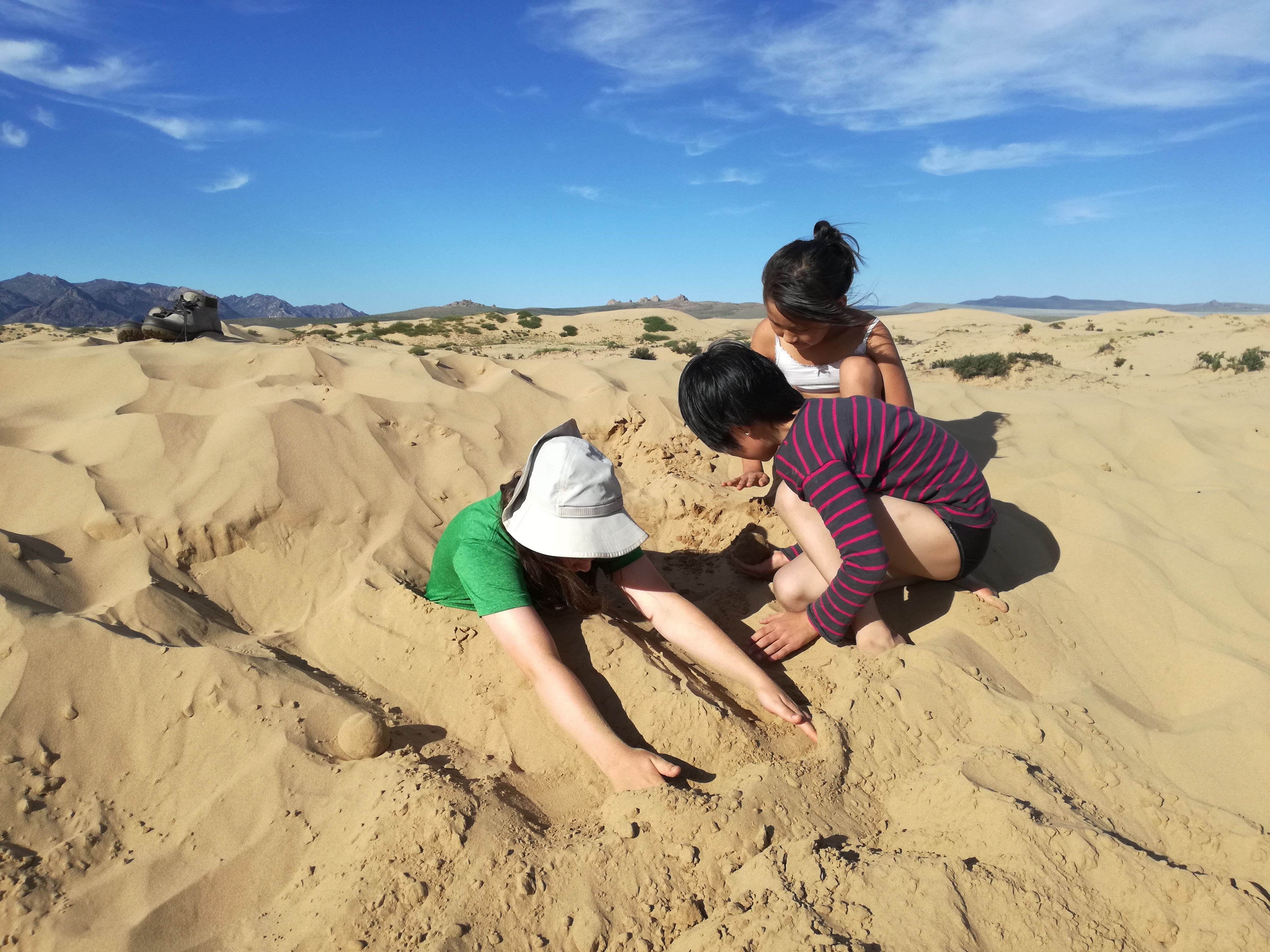 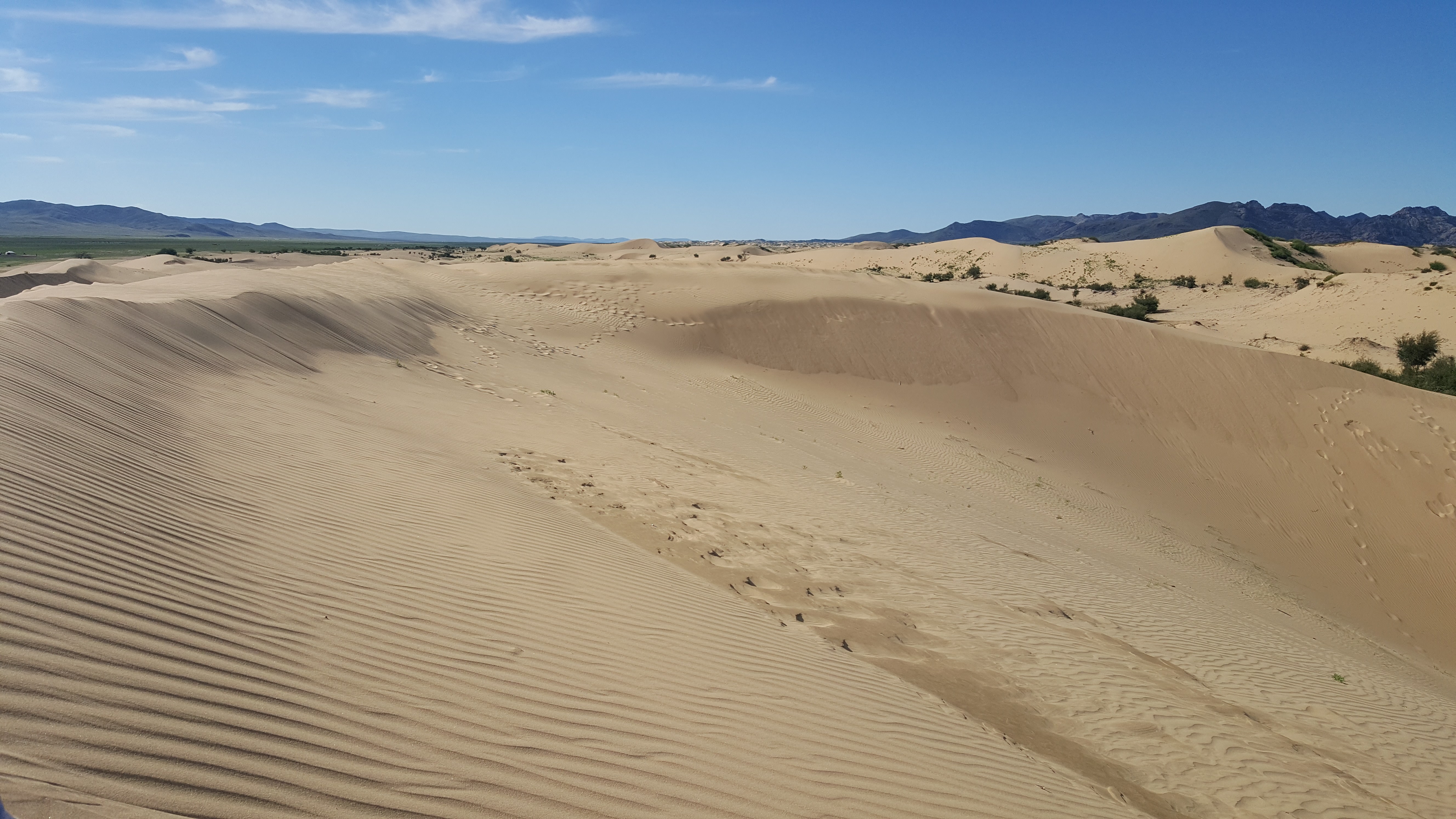 Finally we drove to the nearby home of aÂ shepherd family. We watched them milk their maresÂ by balancing buckets on their legs. The shepherds weren’t connected to the electrical grid, but they had a solar panel and enough car batteries to power a satellite dish and small television. That night we watched the Olympics with them, taking turns churning the fresh mare’s milk into airag (it has to be churned for 2 hours each night). 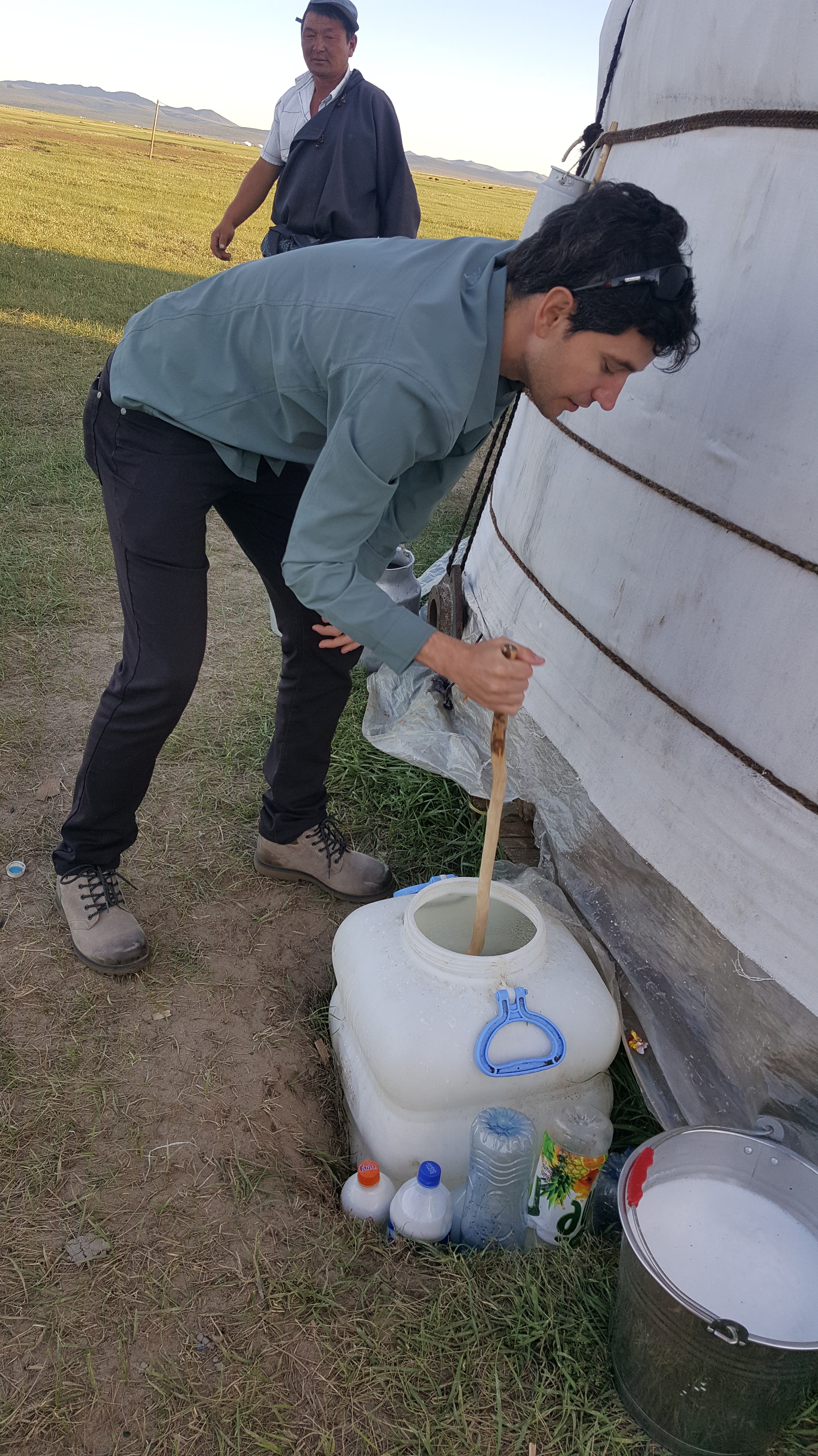 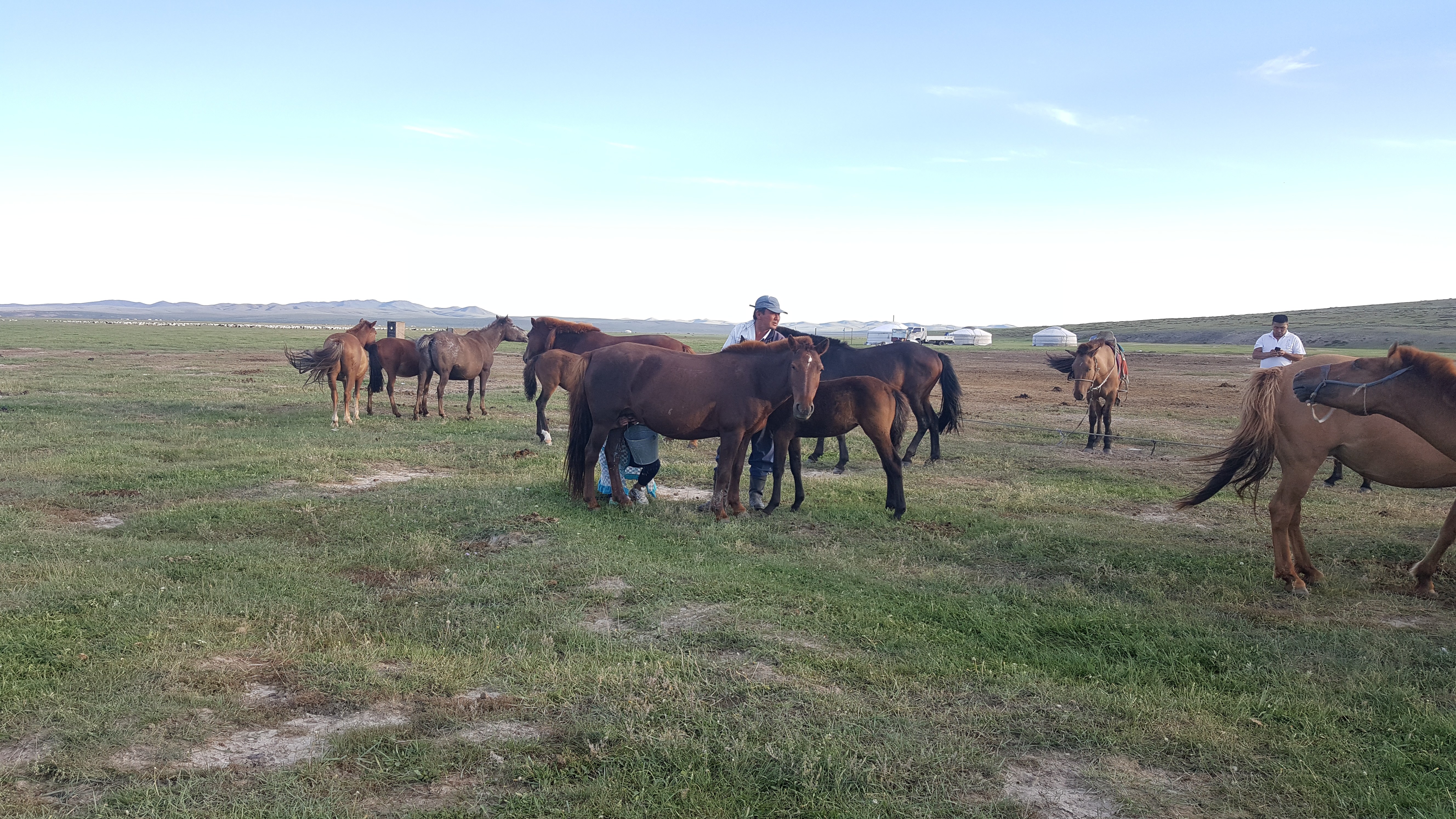 InÂ Kyrgyzstan we witnessed a spectacular night sky full of stars and the Milky Way, and Mongolia was similar but with the added bonus of the Perseid meteor shower. It was an excellent way to end the day. 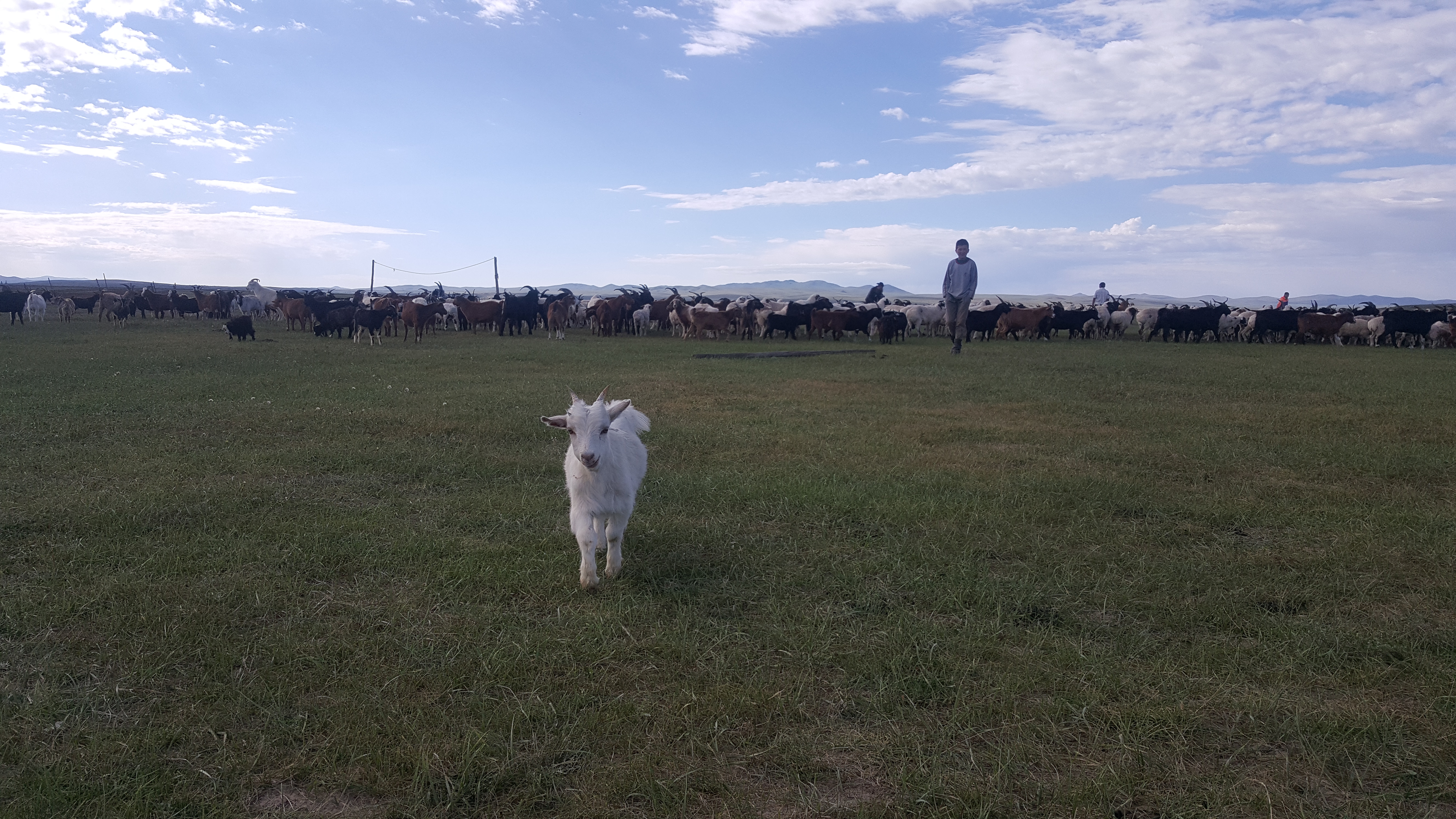 Daily inspection of the herd’s 800 sheep and goats

The next morning, we bid farewell to the shepherds andÂ drove east toÂ Gorkhi-Terelj National ParkÂ and stayed in a ger camp for a few days.

The park is famous for Turtle Rock (a large formation shaped like a turtle) and other unusual rock formations. In particular, there are many giant rocks that appear to have been carefully placed on top of ridges and in some cases stacked on top of each other. I’d love to know what geological process creates these formations. 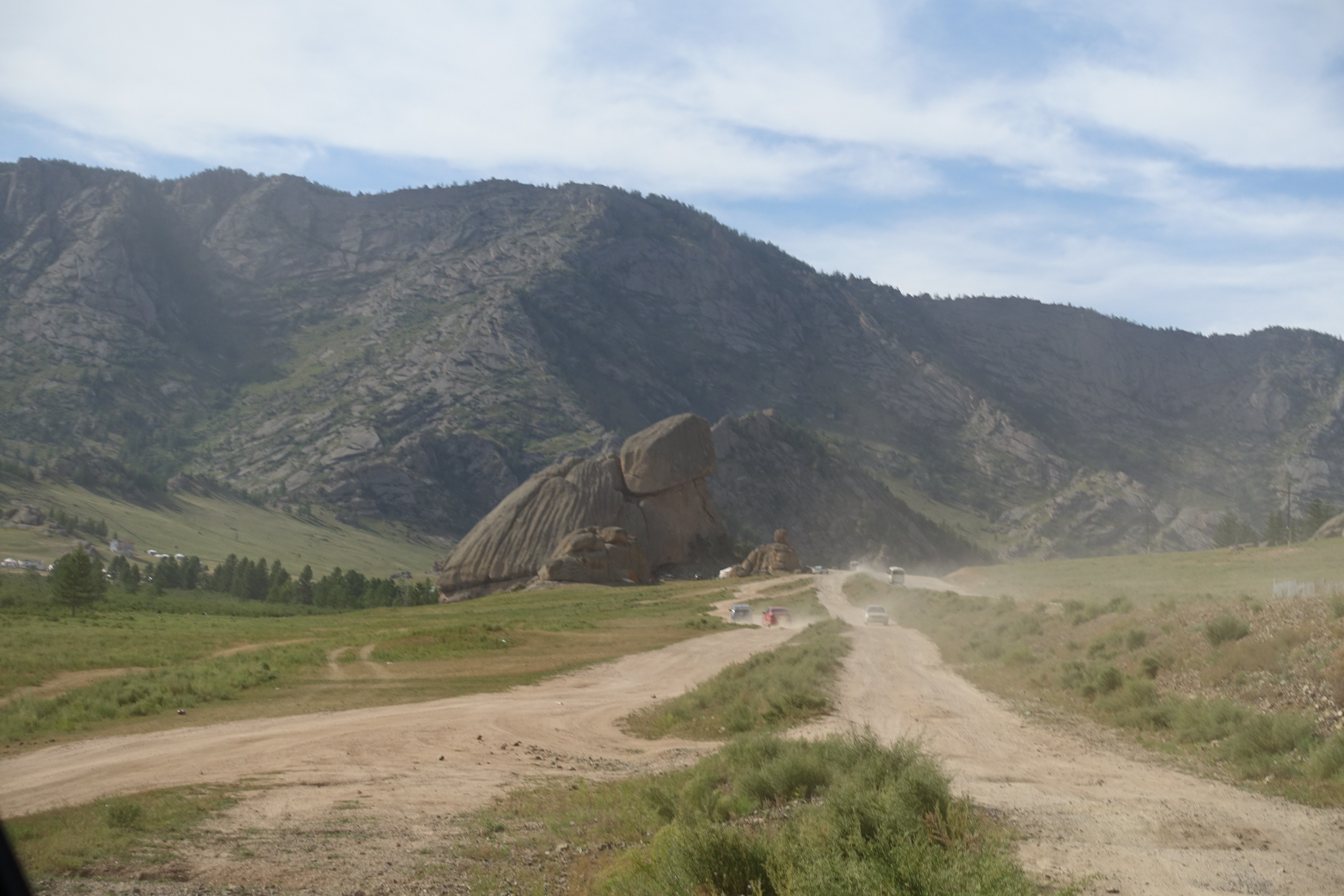 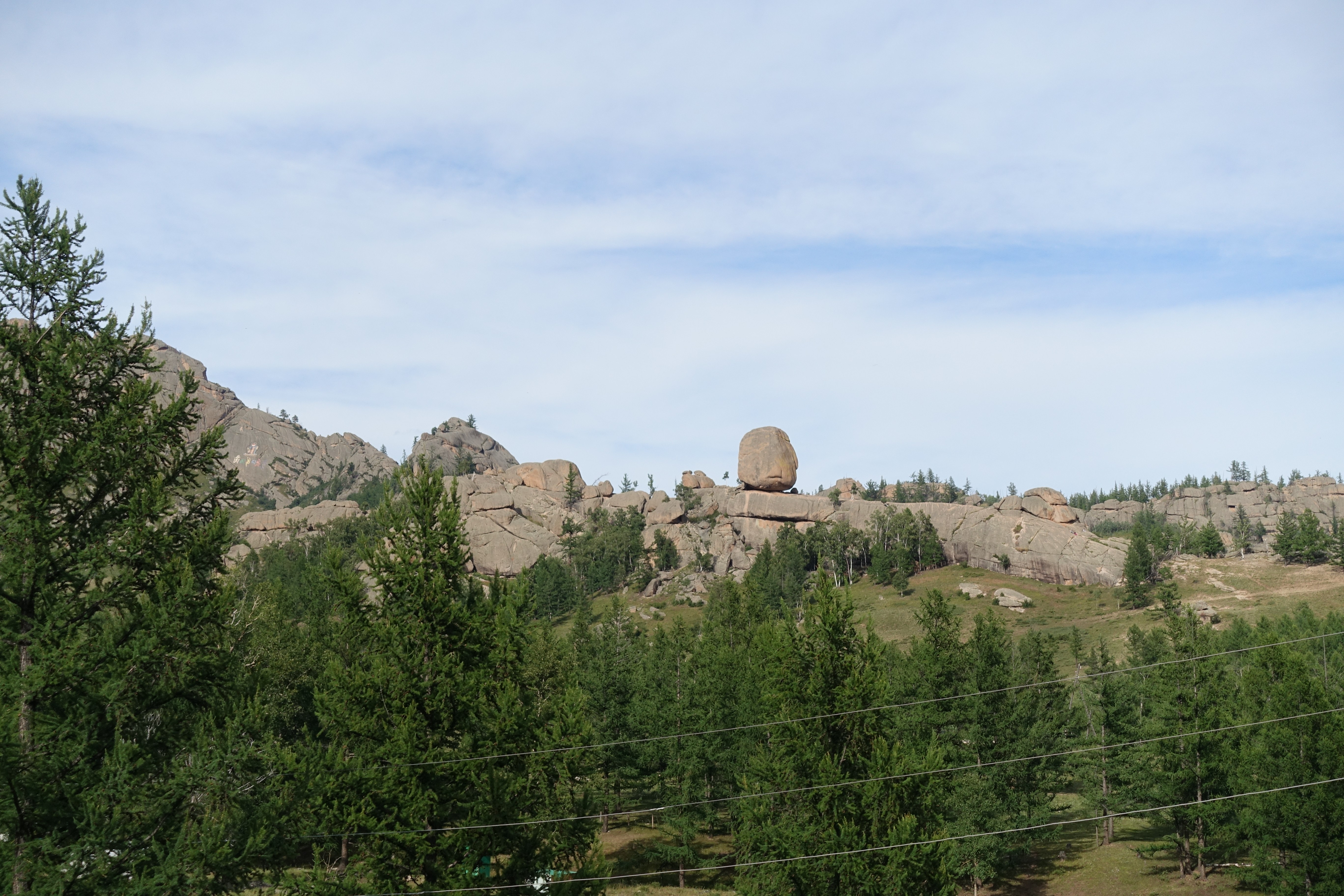 A boulder seemingly placed on a ridge 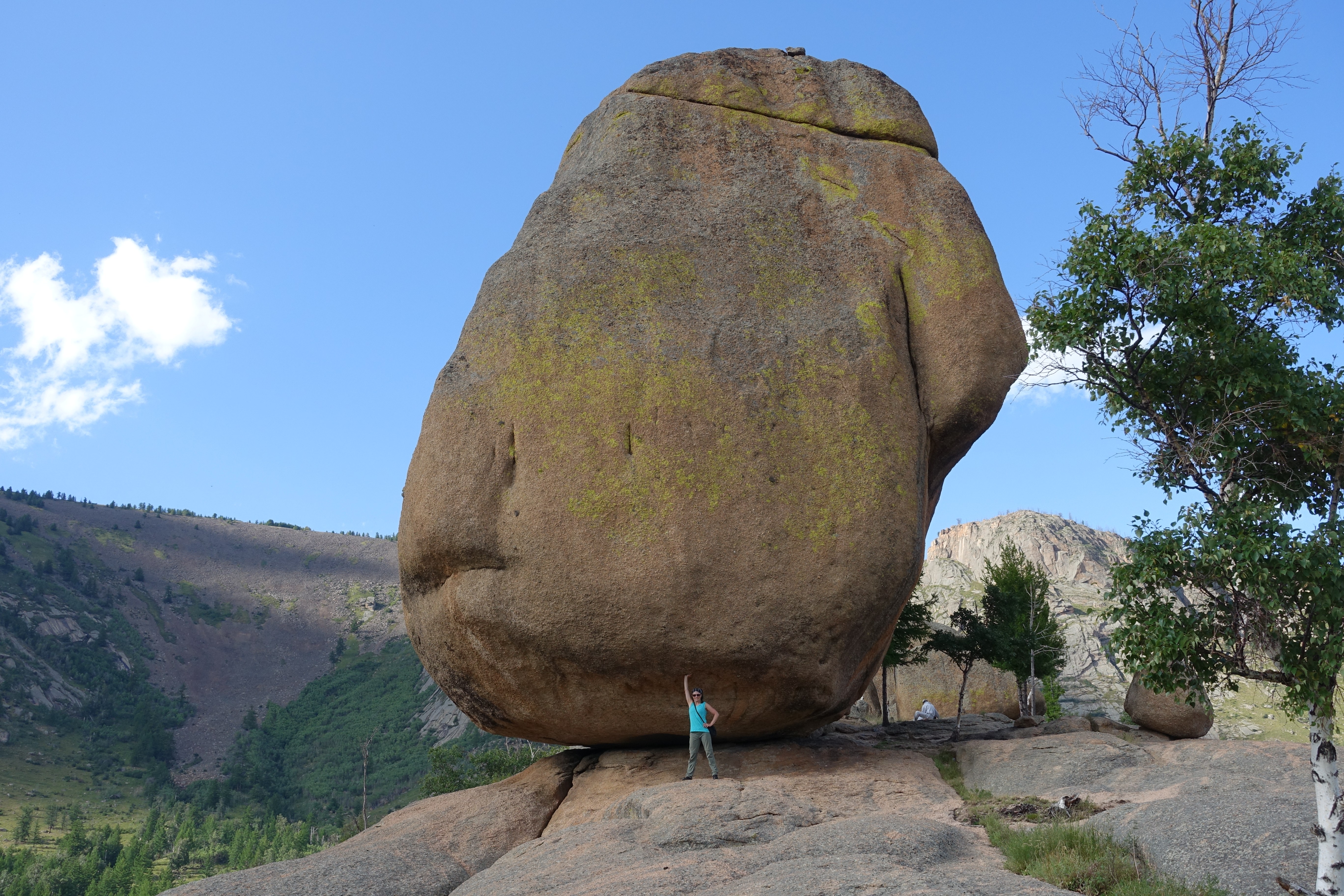 The boulder is really big

We went to Terelj because Ruby loved horseback riding in Kyrgyzstan and wanted to do it again in Mongolia. Unlike in Kyrgyzstan, theÂ horse owners at the park wanted us to do a shakedown ride in advance to test our skills and make sure we were compatible with our horses. Thanks to our recent experience, we all passed easily. Our horse guideÂ said that we arrived as American tourists, but would leave as Mongolians. 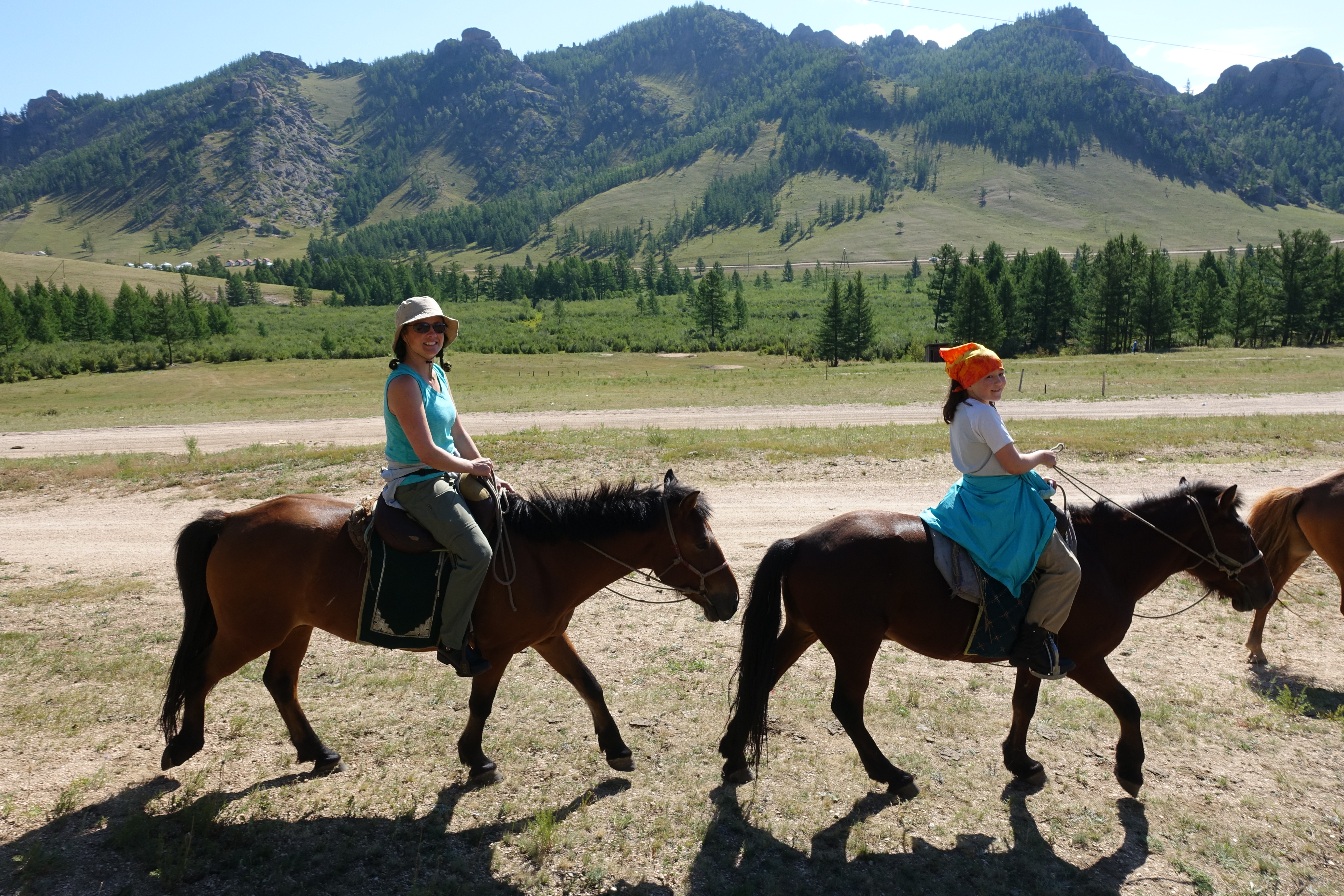 The next day we set off for our 5 hour ride out of the park. The scenery was similar to Kyrgyzstan, but slightlyÂ more alien. Some vistas gave me the distinct impression of being on another planet. 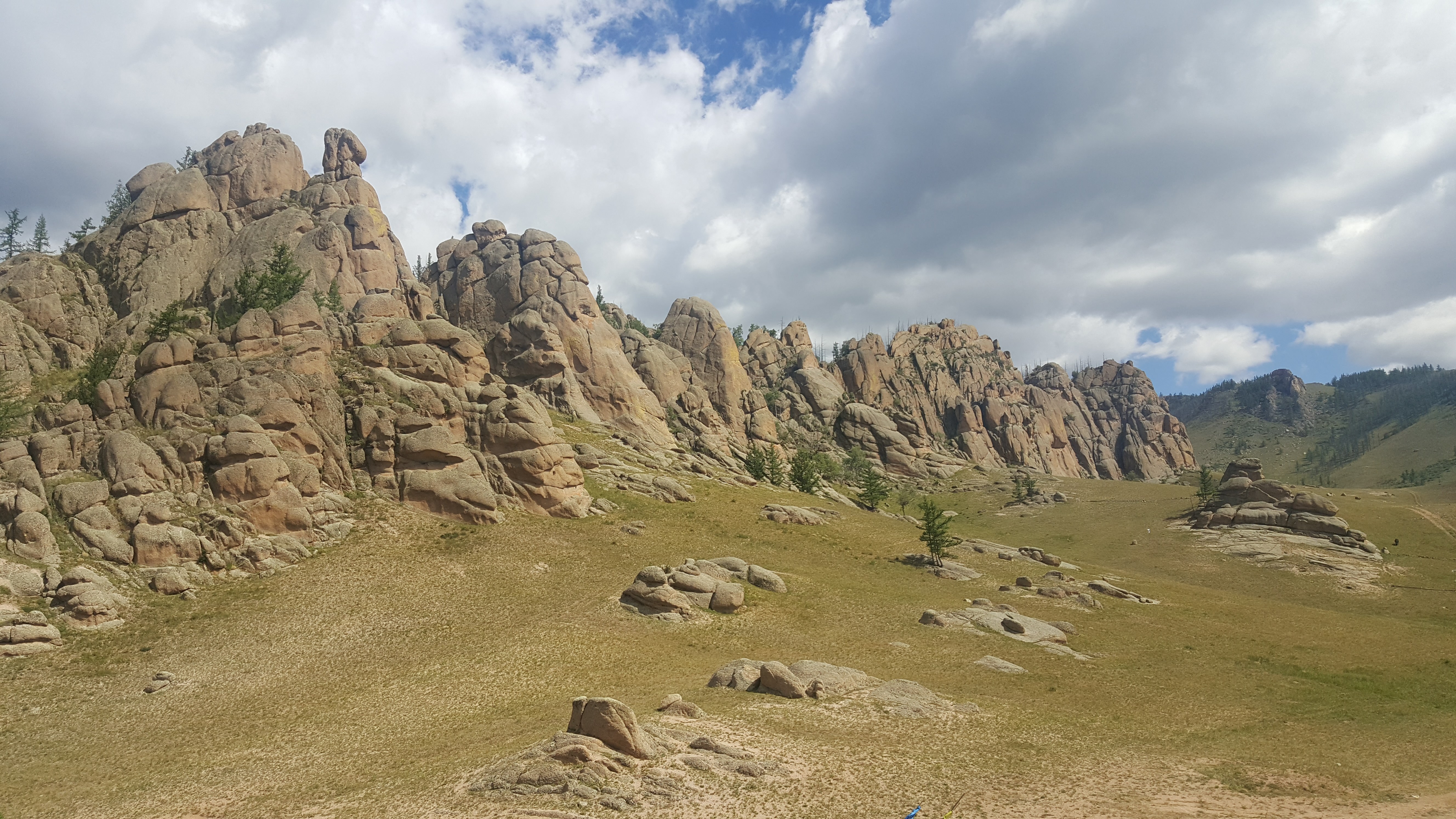 This looks a bit like Star Wars to me 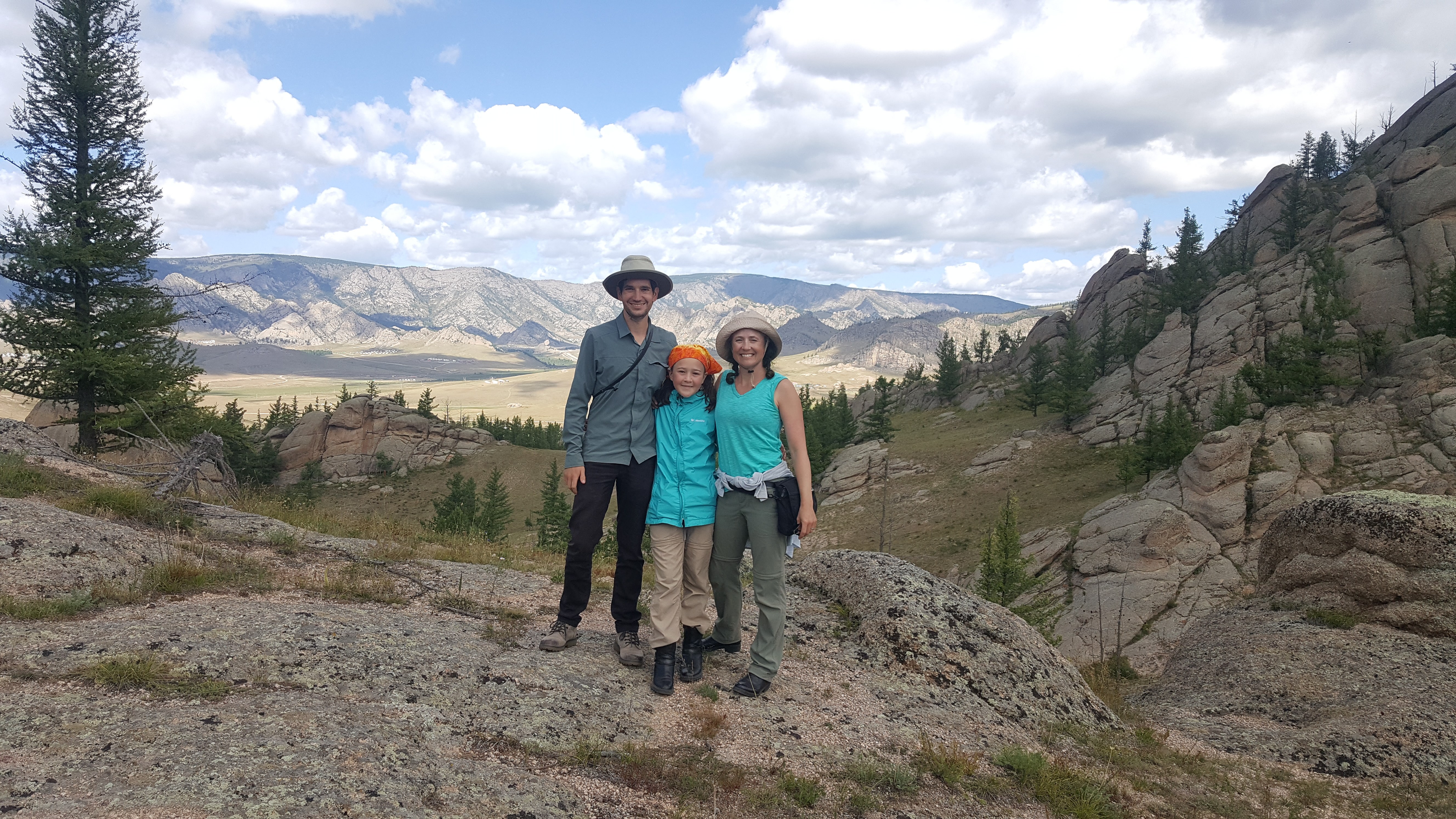 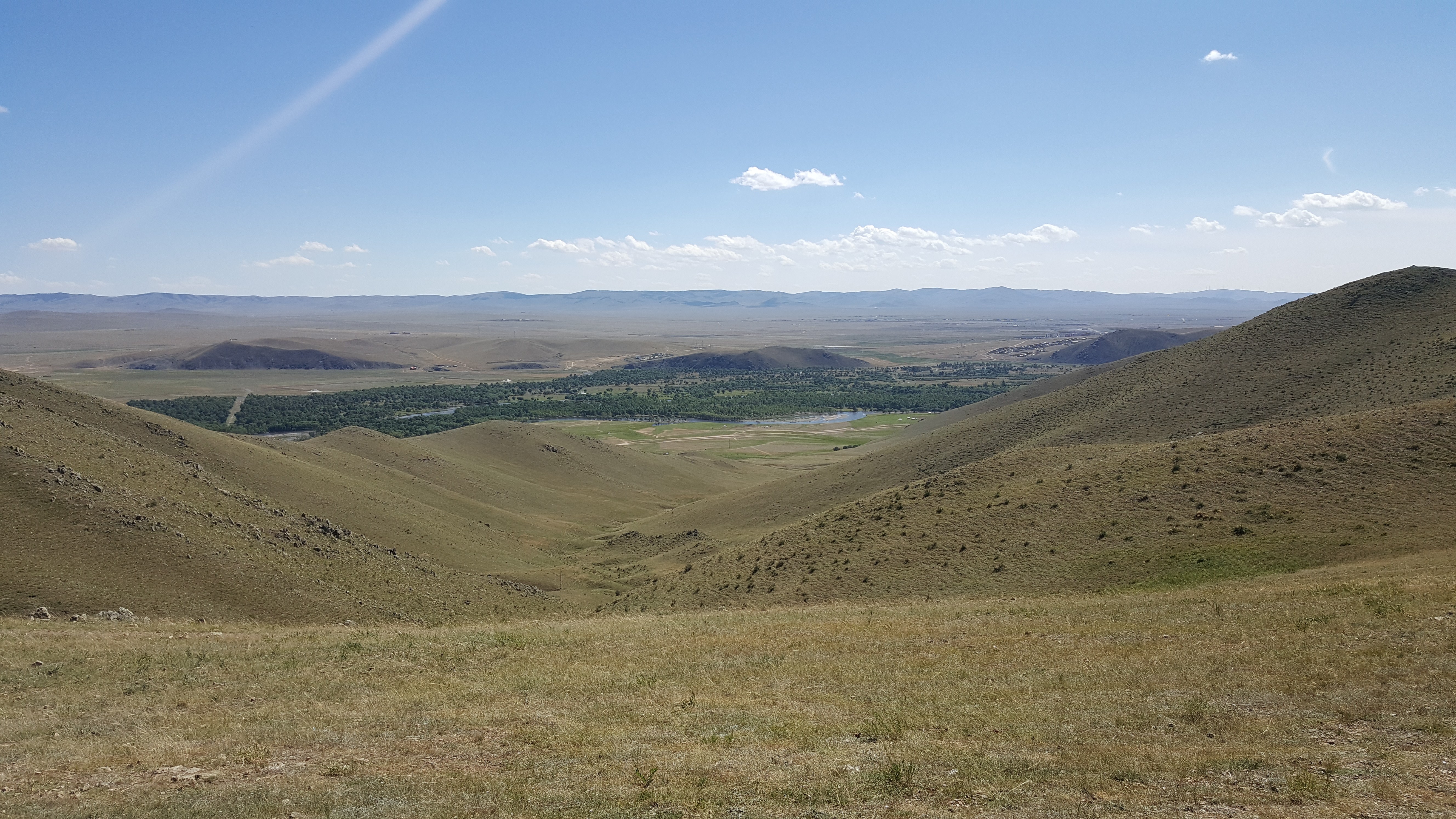 Mongolian horses are smaller than Kyrgyz horses, but (at least for me) more difficult to control. The Kyrgyz horse I rode was powerful and well-behaved, if a bit antisocial (it didn’t like being too close to the other horses).Â The horse I rode in Mongolia felt more like a barely restrained wild beast. Once it got going, it really didn’t want to slow down. I had to tug very firmly on the reins to get the message across.Â It was both more exciting and more exhaustingÂ than riding in Kyrgyzstan.

After the ride, our driver met us on the highway and we droveÂ back to Ulaanbaatar.

The slums of Ulaanbaatar on the distant hills

Kate’s book recommendation: I like to read books set in the places I visit for additional context, history, and color.Â For Mongolia, I recommend The Tiger Queens: The Women of Genghis KhanÂ by Stephanie Thornton.