Indonesia was a specialÂ destinationÂ for us because we were joined by Steve and Sarah, Ruby’s father and stepmother. We had a great time traveling together.Â Sarah had lived in Indonesia several years ago and was still conversational in the language, which proved very helpful.

Our first destination was Gili Air (literally “Water Island”), one of three small islands northwest of Lombok. Circumnavigating Gili Air on foot takes about an hour, and no motorized vehicles are allowed, only horse carts and electric scooters. 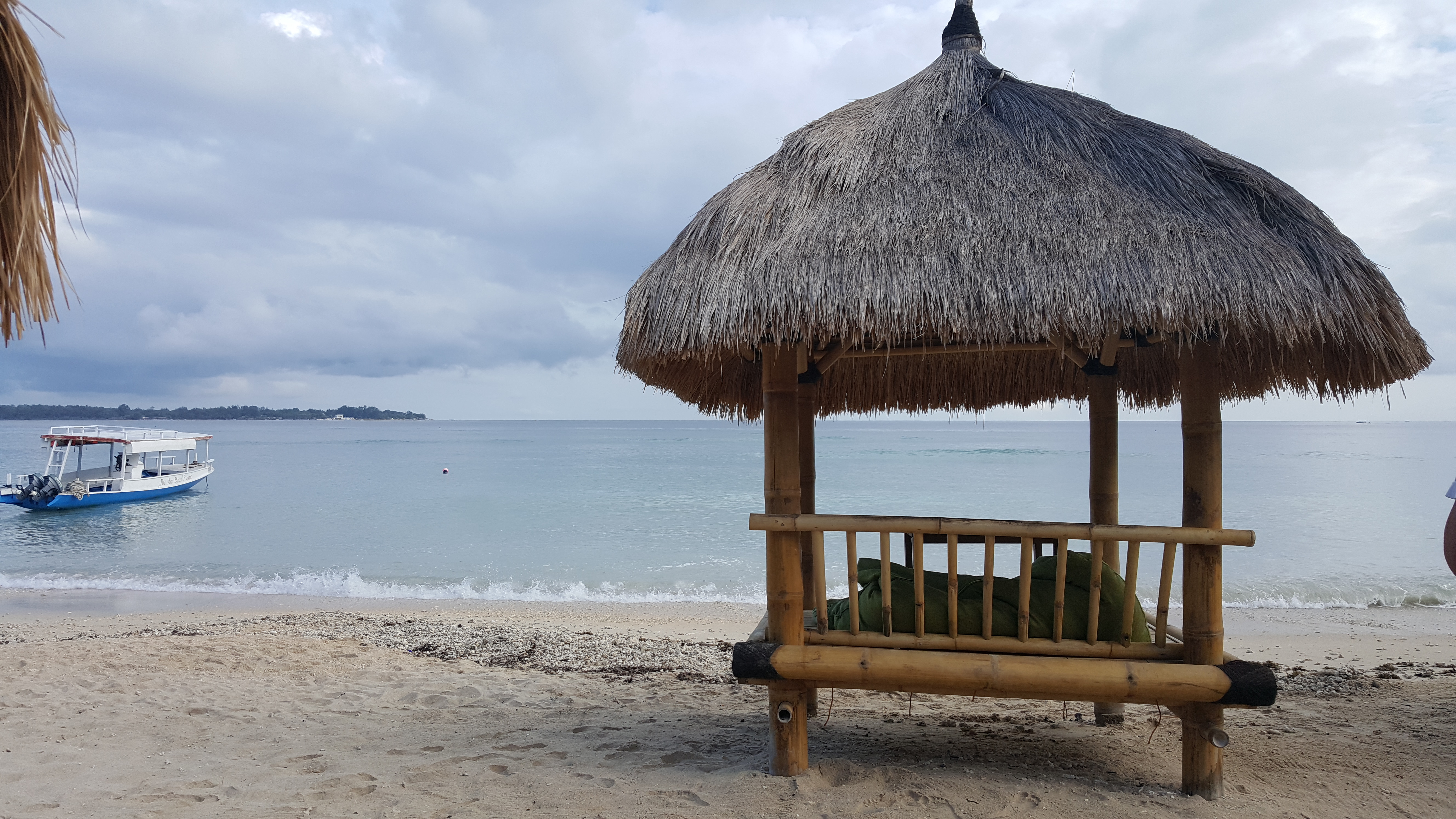 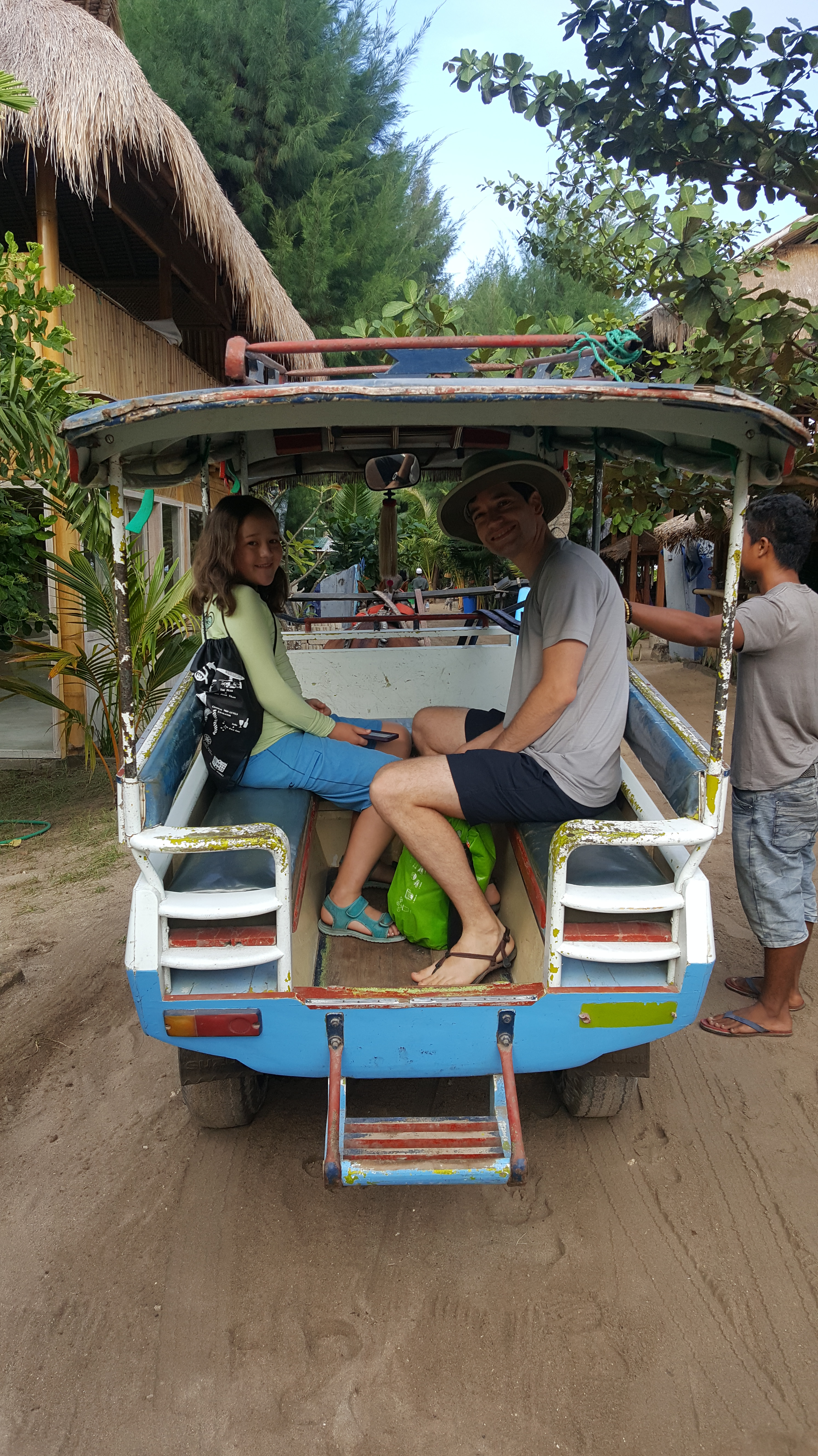 We hired a boat and enjoyed a day of snorkeling around the islands. Sea turtles were plentiful and the fish and coral were very entertaining. 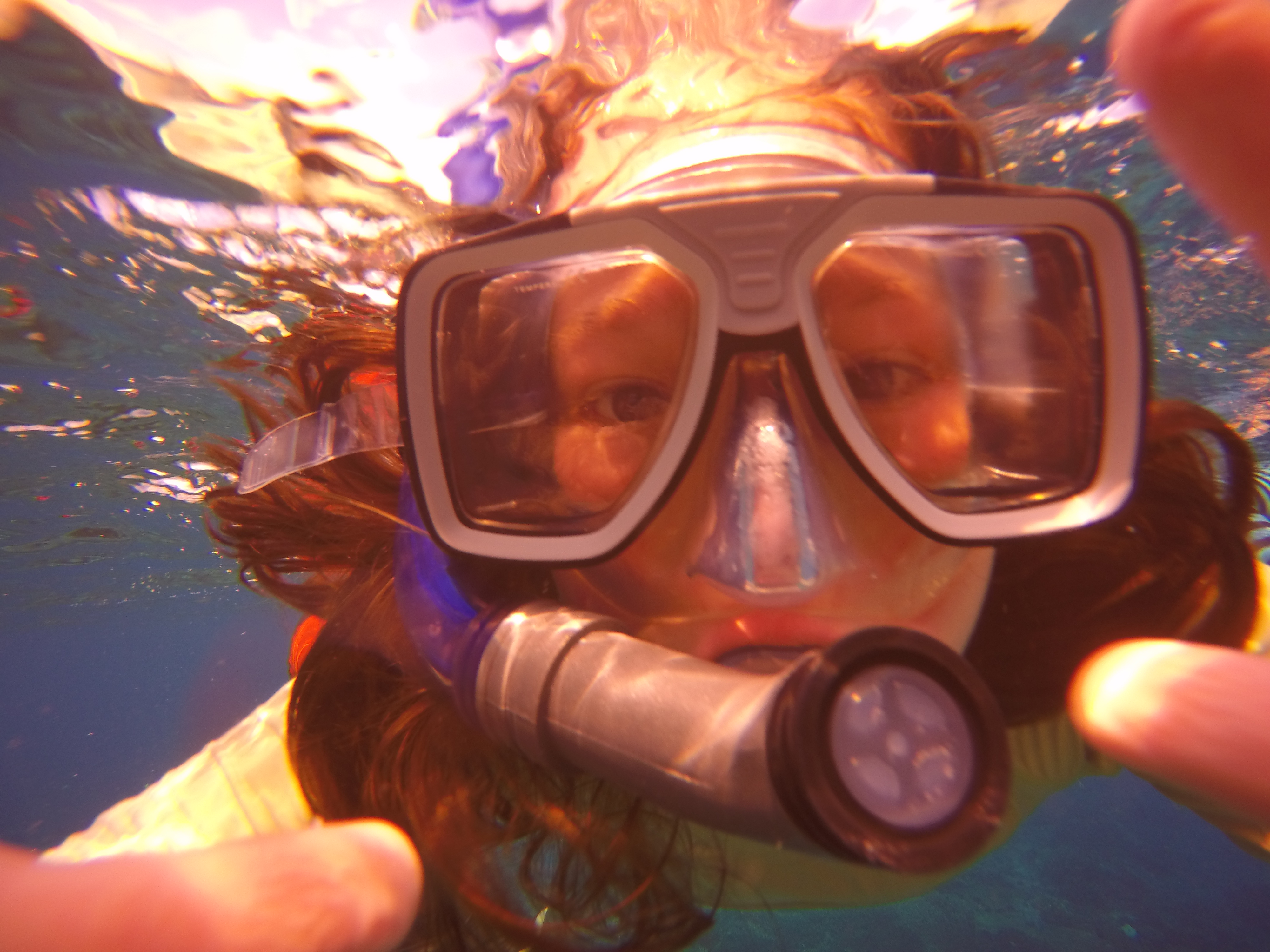 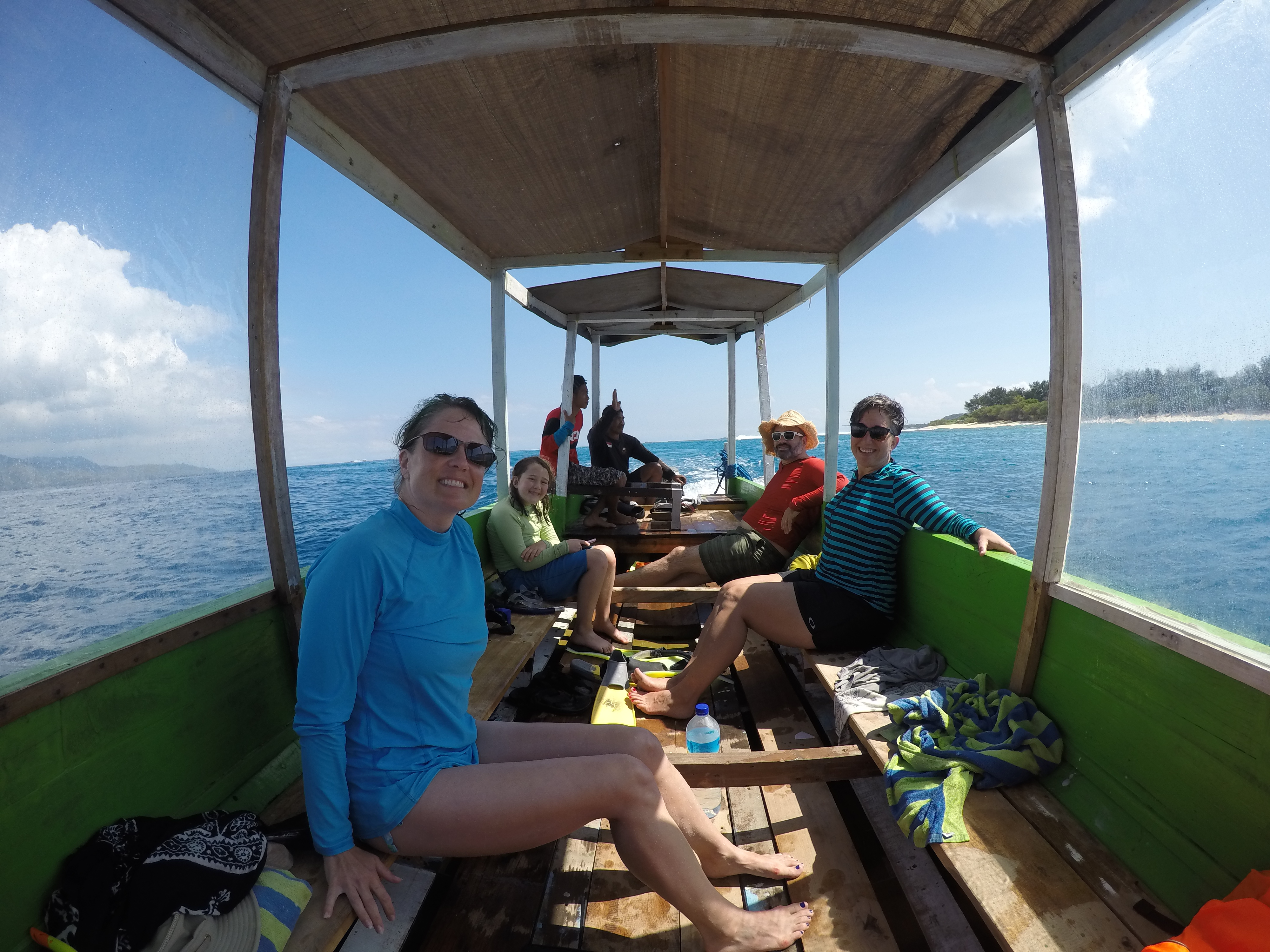 Thanks to Sarah’s food memories, we found an excellent martabak and terang bulan stand. If I had to choose one food to bring back with me from the entire trip so far, it would be a close race between these two. 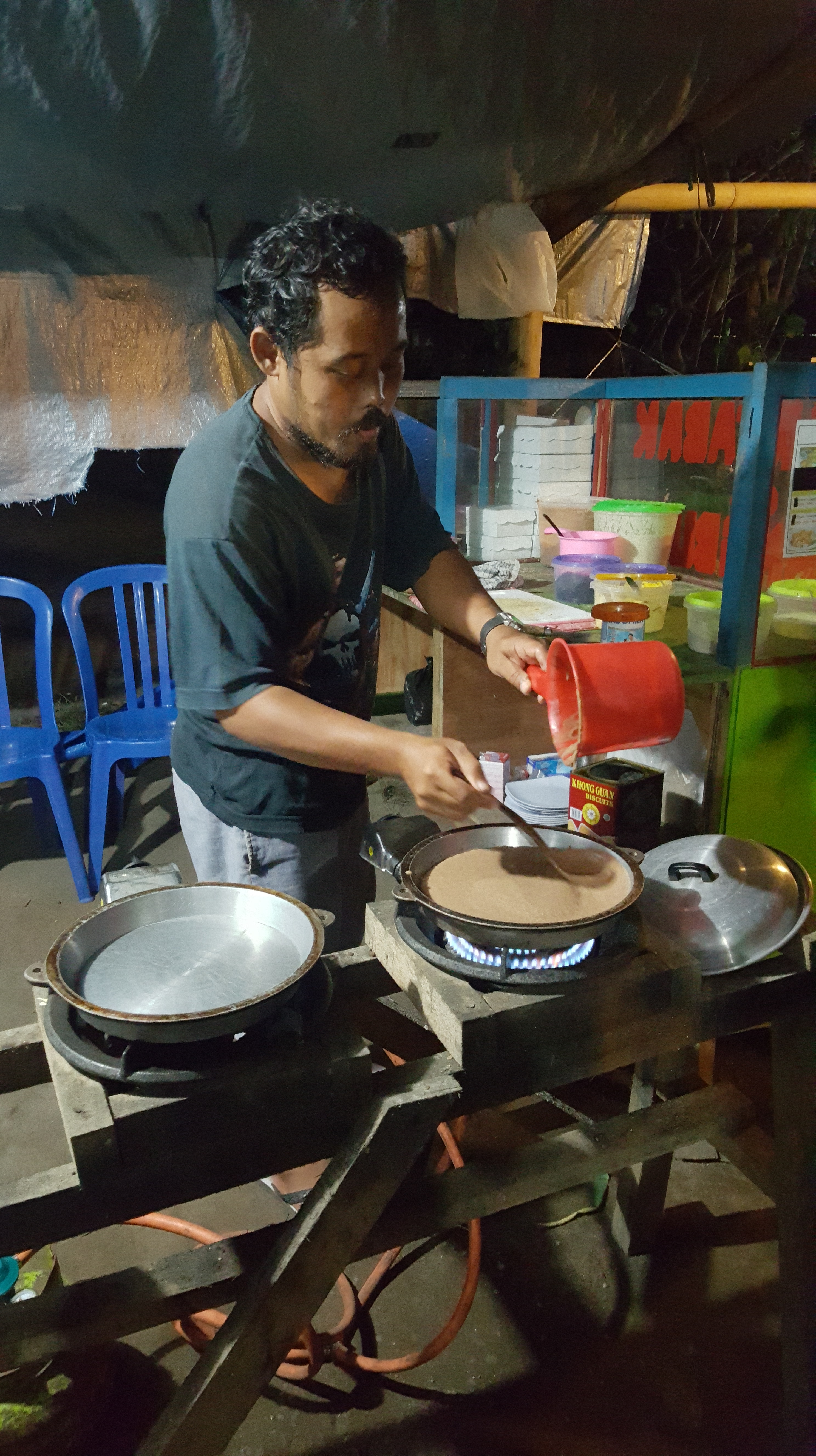 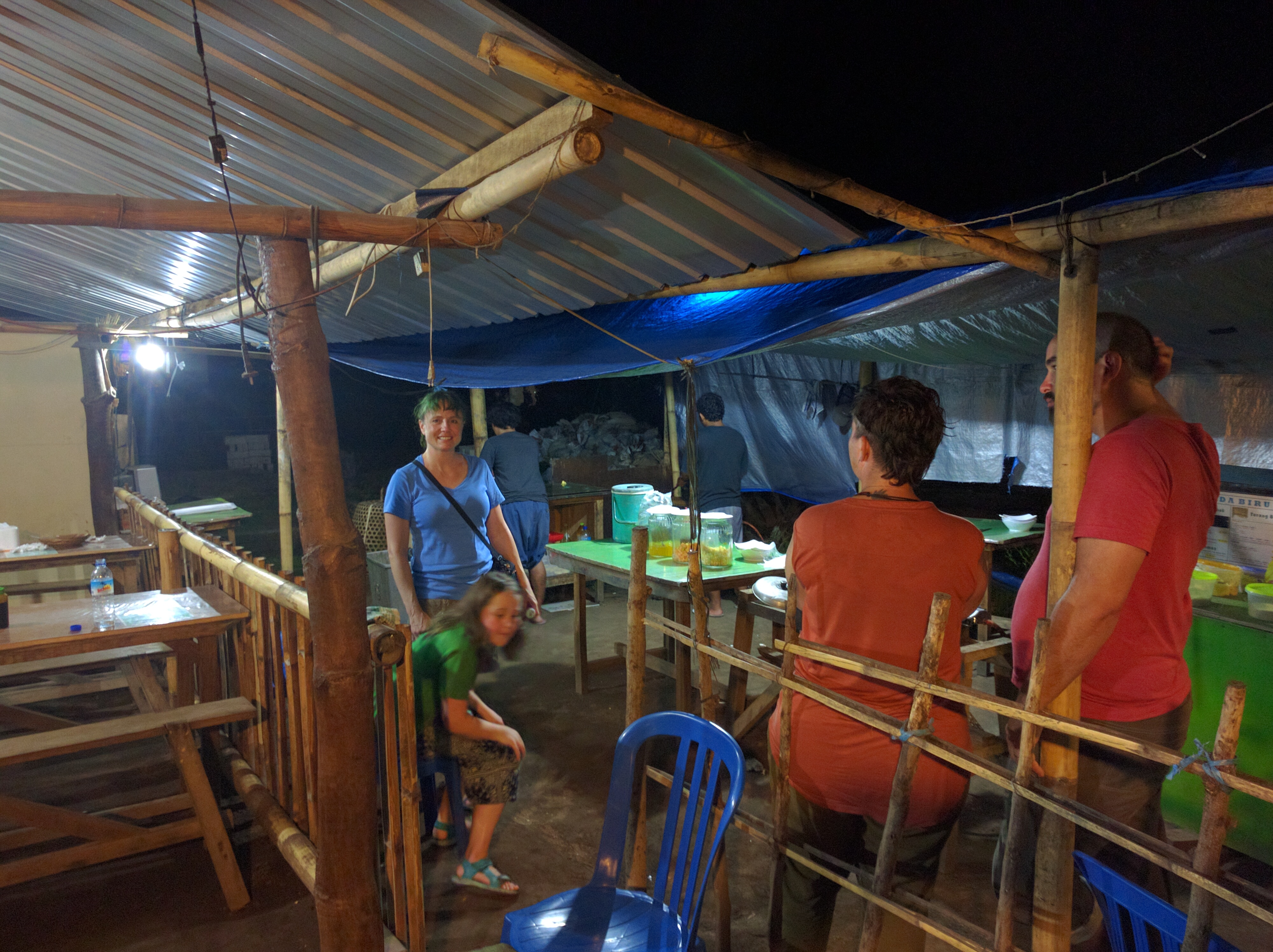 We had considered scuba diving in the Malaysian Perhentian Islands earlier, but Ruby wasn’t quite ready for it then. This time she dove in enthusiastically and did an excellent job of learning the skills and staying calm (quite difficult since there’s no talking underwater). Read her post about itÂ here.

On our way to the dive spot. To Ruby’s right is our fantasticÂ instructor Liz from Manta Dive.

And finally, we took a whirlwind of a cooking class, learning to cook four Indonesian dishes in a couple hours. I’m not sure I could cook it all again, but it definitely tasted good! 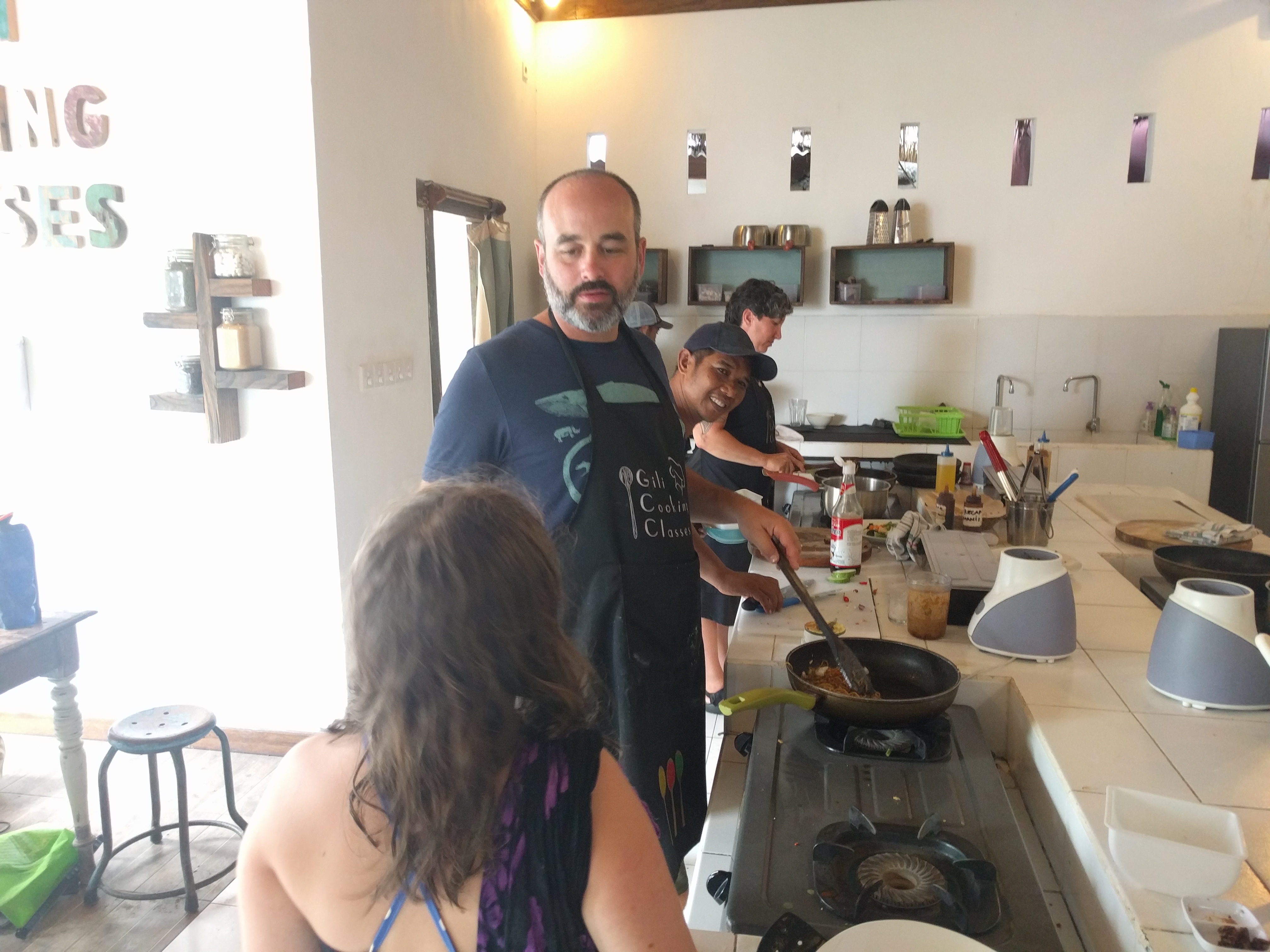 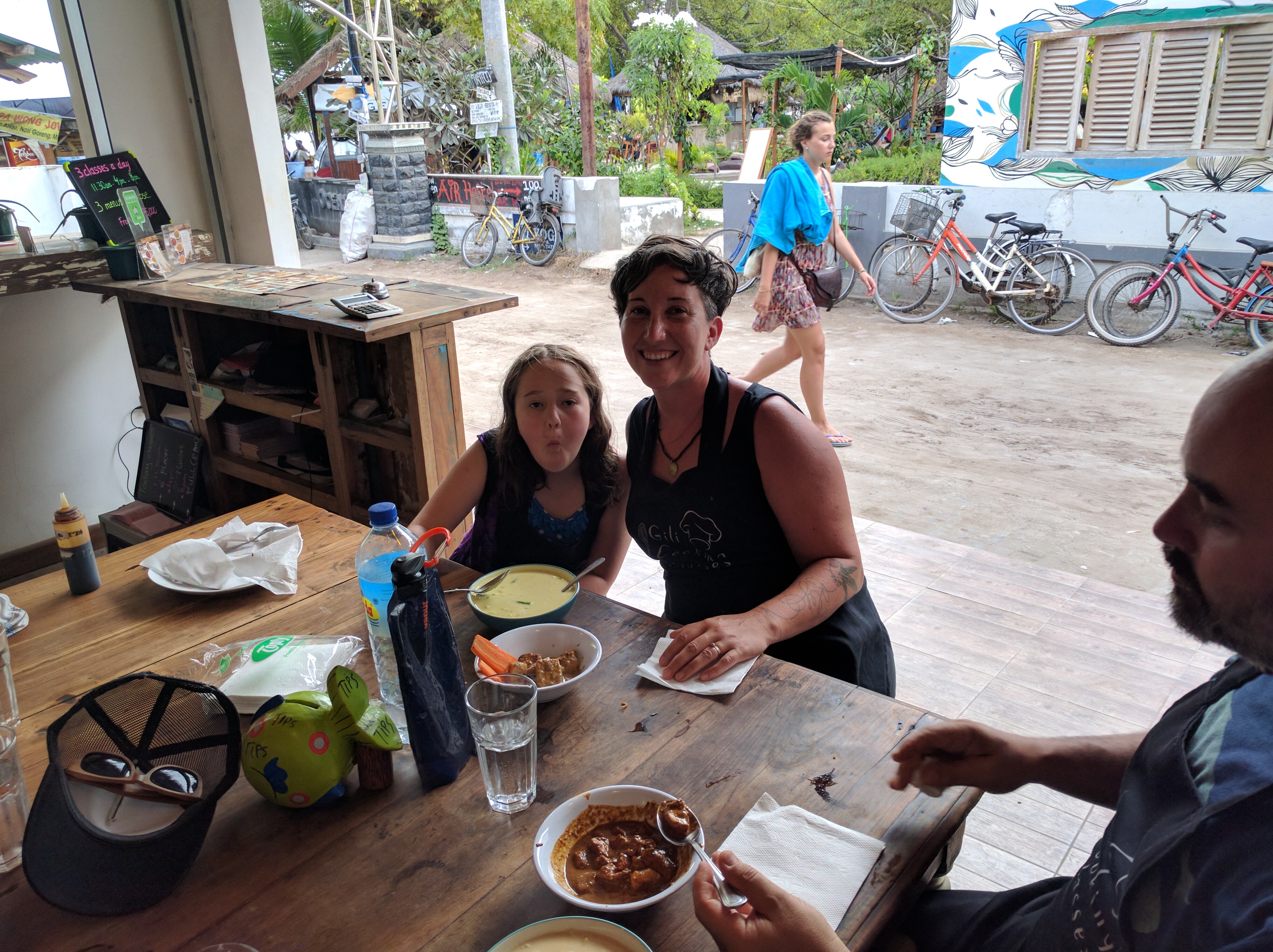 After Gili Air, we took a boat over to Lombok itself and headed to Senaru, a little village mostly catering to trekkers wanting to hike the volcano peak Rinjani. We didn’t feel prepared for that level of exertion so we visited two local waterfalls instead: Air Terjun Sindang Gila (“Slightly Crazy Waterfall”) and Tiu Kelep, the latter of which had a pretty exciting swimming hole directly under the falls. Along the way we passed families of macaque monkeys,Â and on the way back took a detour through a cave-like aqueduct. The final touch was an impromptu sunset tour of the rice paddies at the base of the cliff by our excellent guide, Li. 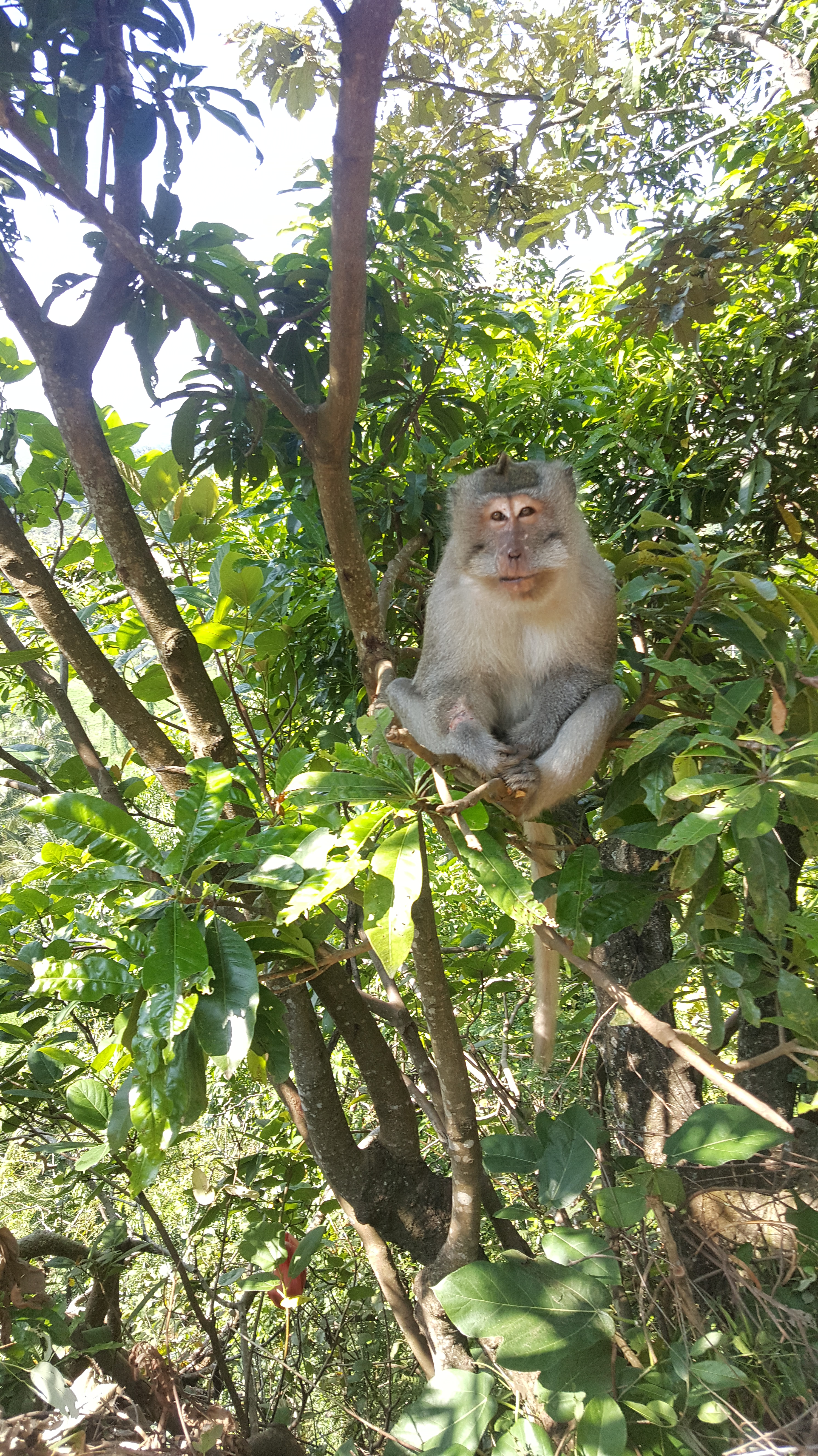 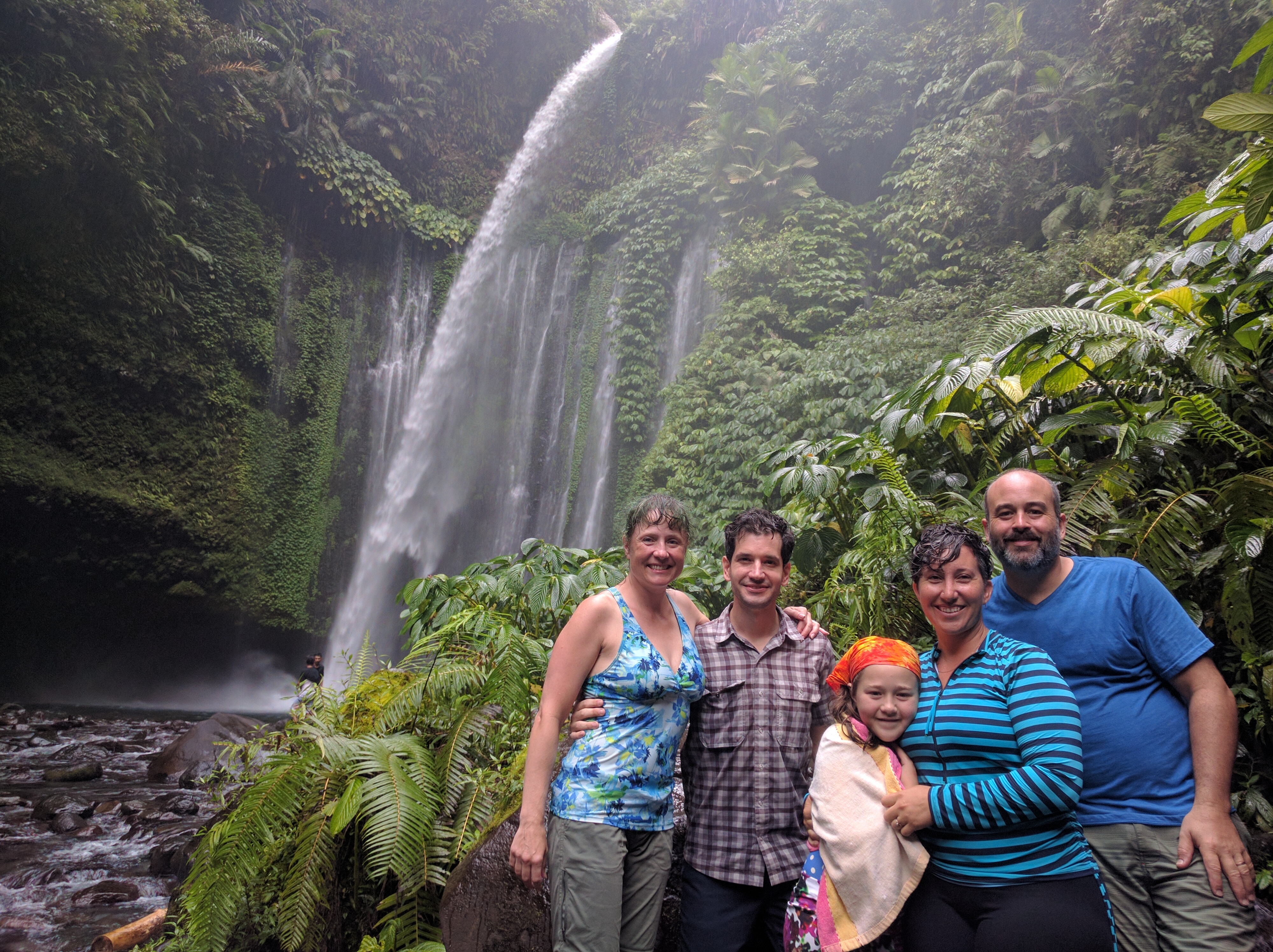 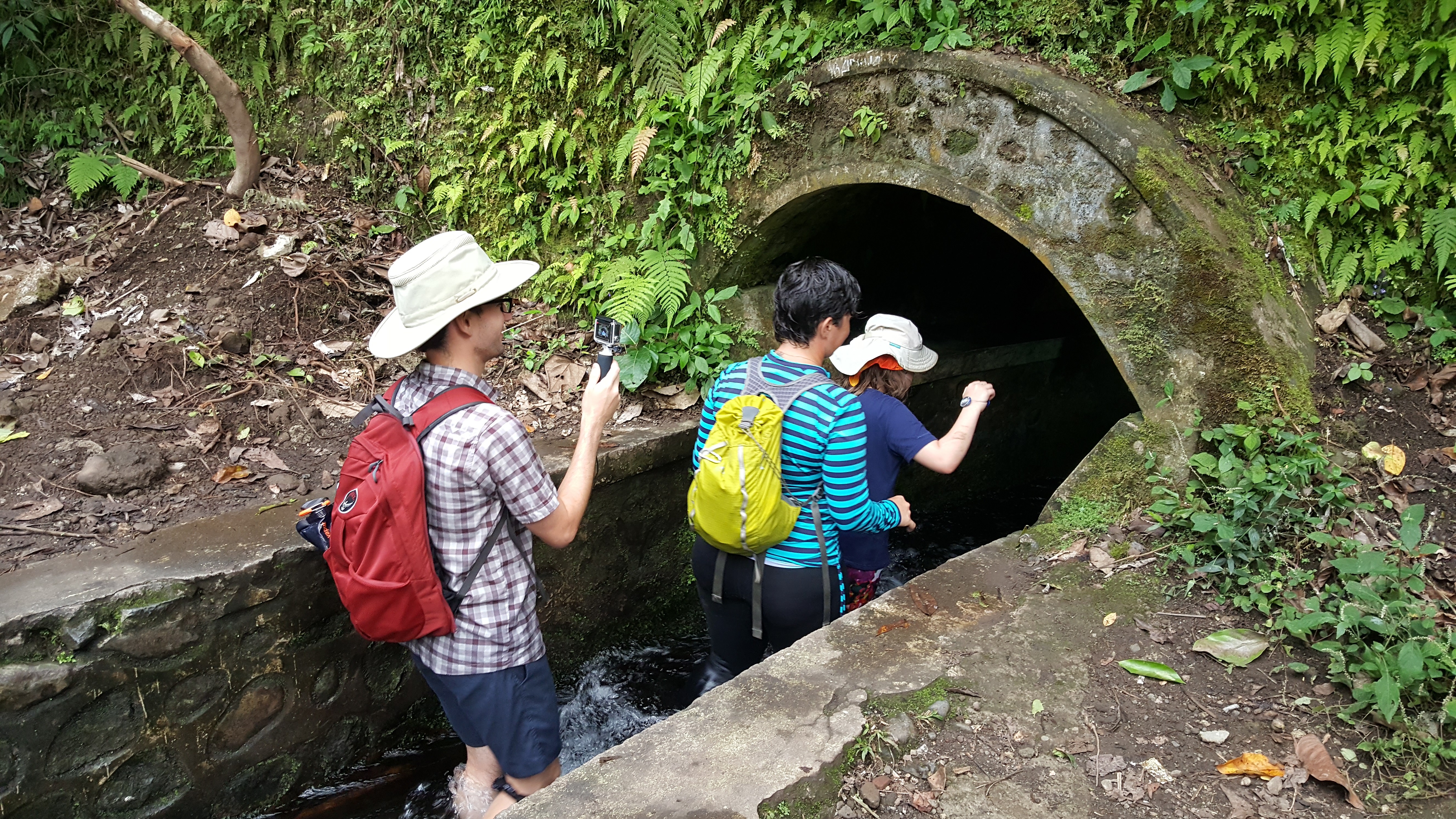 We then headed to Kuta (Lombok, not Bali) on the south side of the island for some beach relaxation. Kuta is well known for being a surf destination, so all of us except Kate (who said she’d tried surfing once and that was enough) took surfing lessons at Selong Belanak beach. Turns out surfing is very difficult, very tiring, and produces nasty friction burns on hands and knees that take weeks to heal. Still, whenever I felt discouraged, I glanced over at the surf instructors stealing waves in between students, clearly having the time of their lives, and my mood instantly improved. 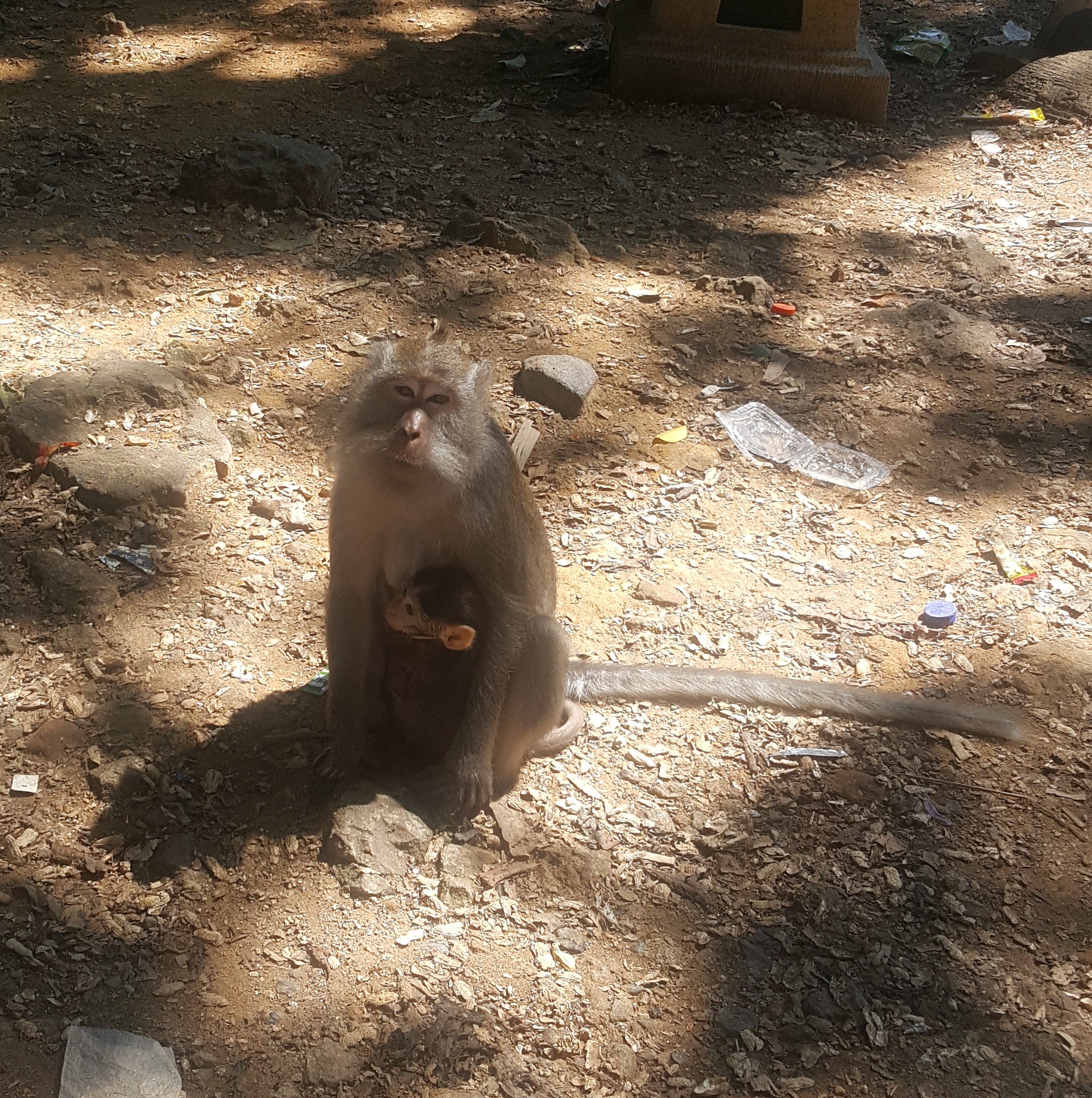 In the Monkey Forest 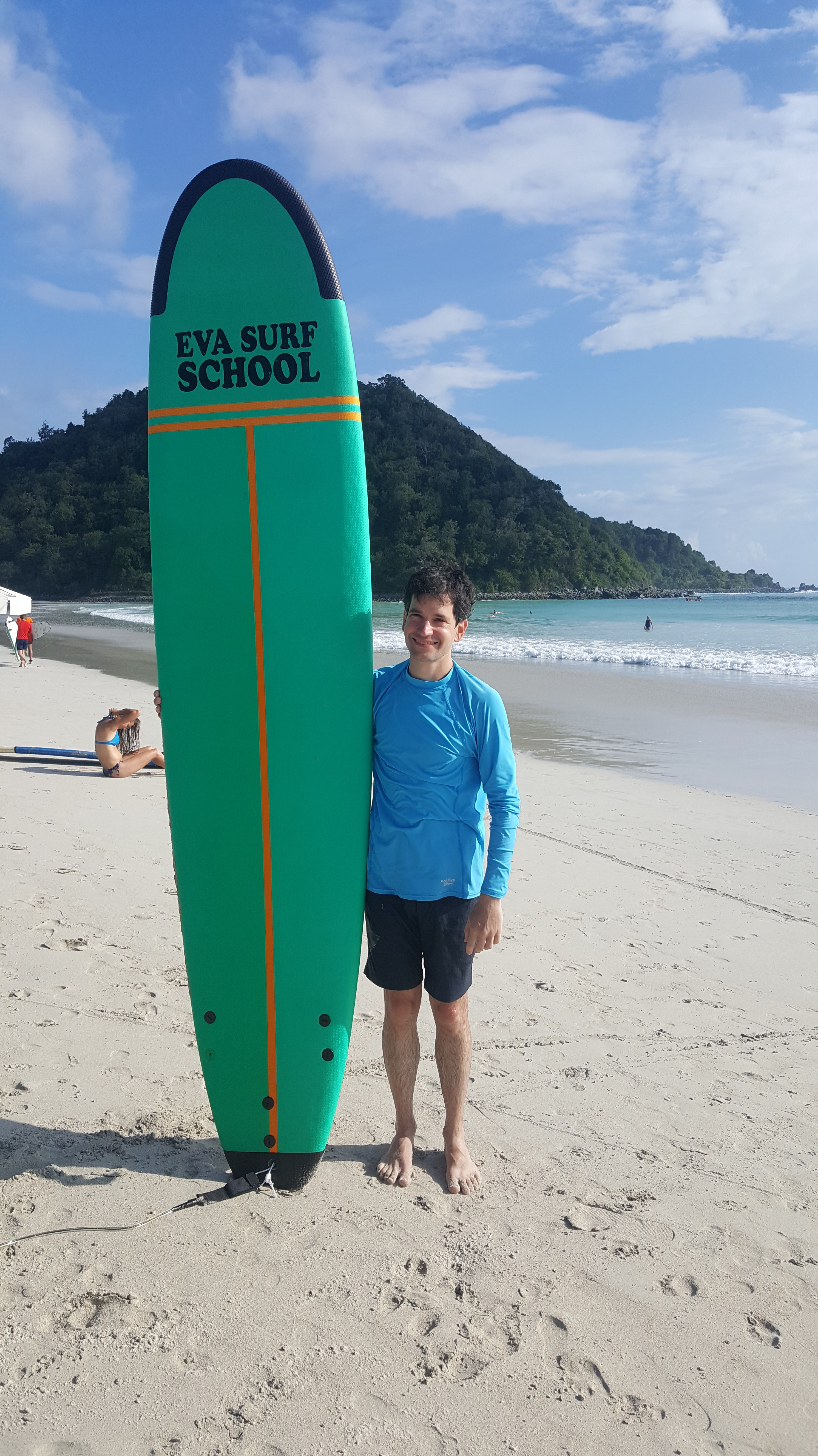 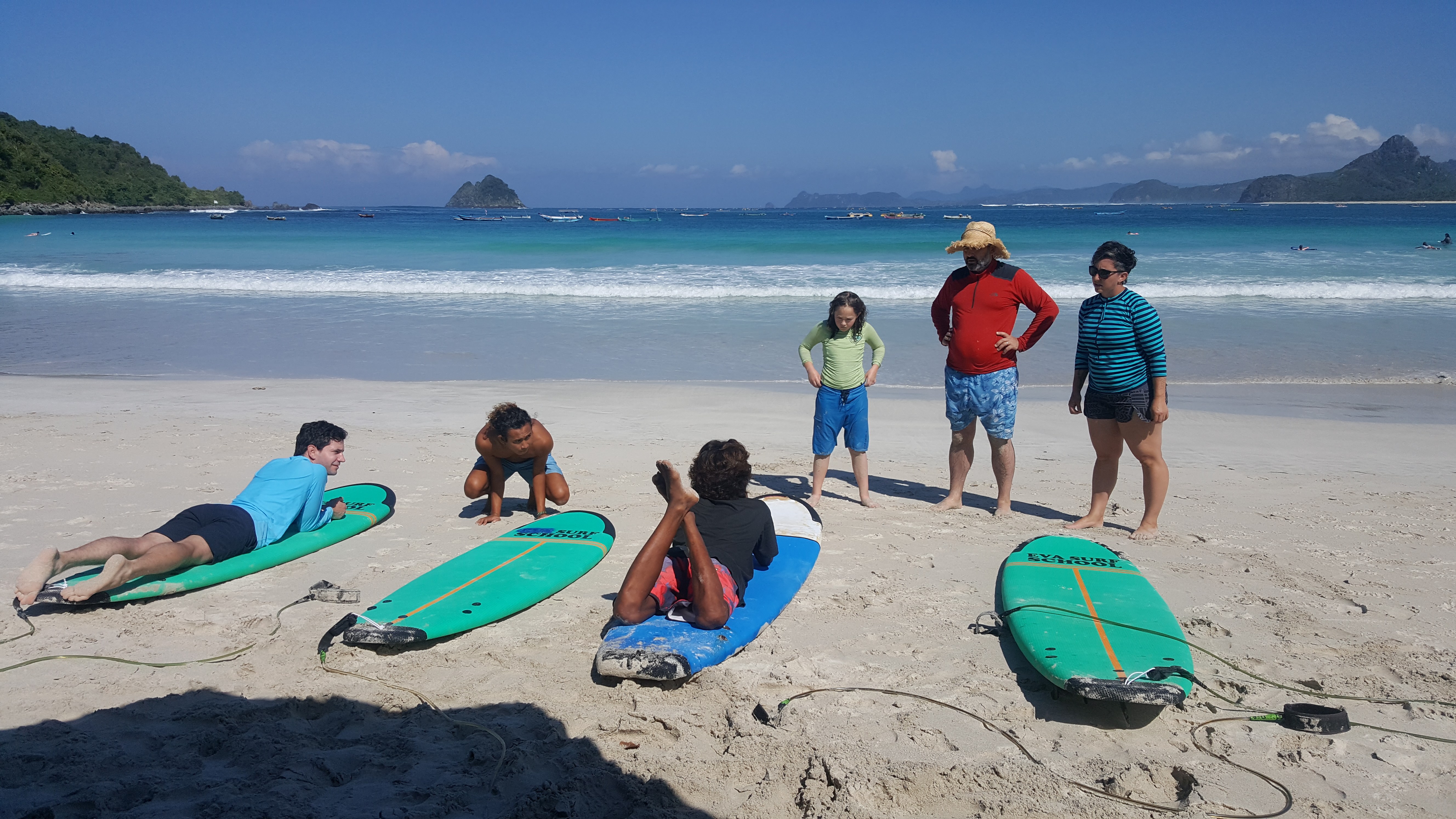 Our final destination was Ubud.Â With our anniversary right around the corner, Kate and I took the opportunity to visit one of the many fancy restaurants there, Blanco par Mandif. The 13-course tasting menu was excellent, on par with the best in Seattle in my opinion. 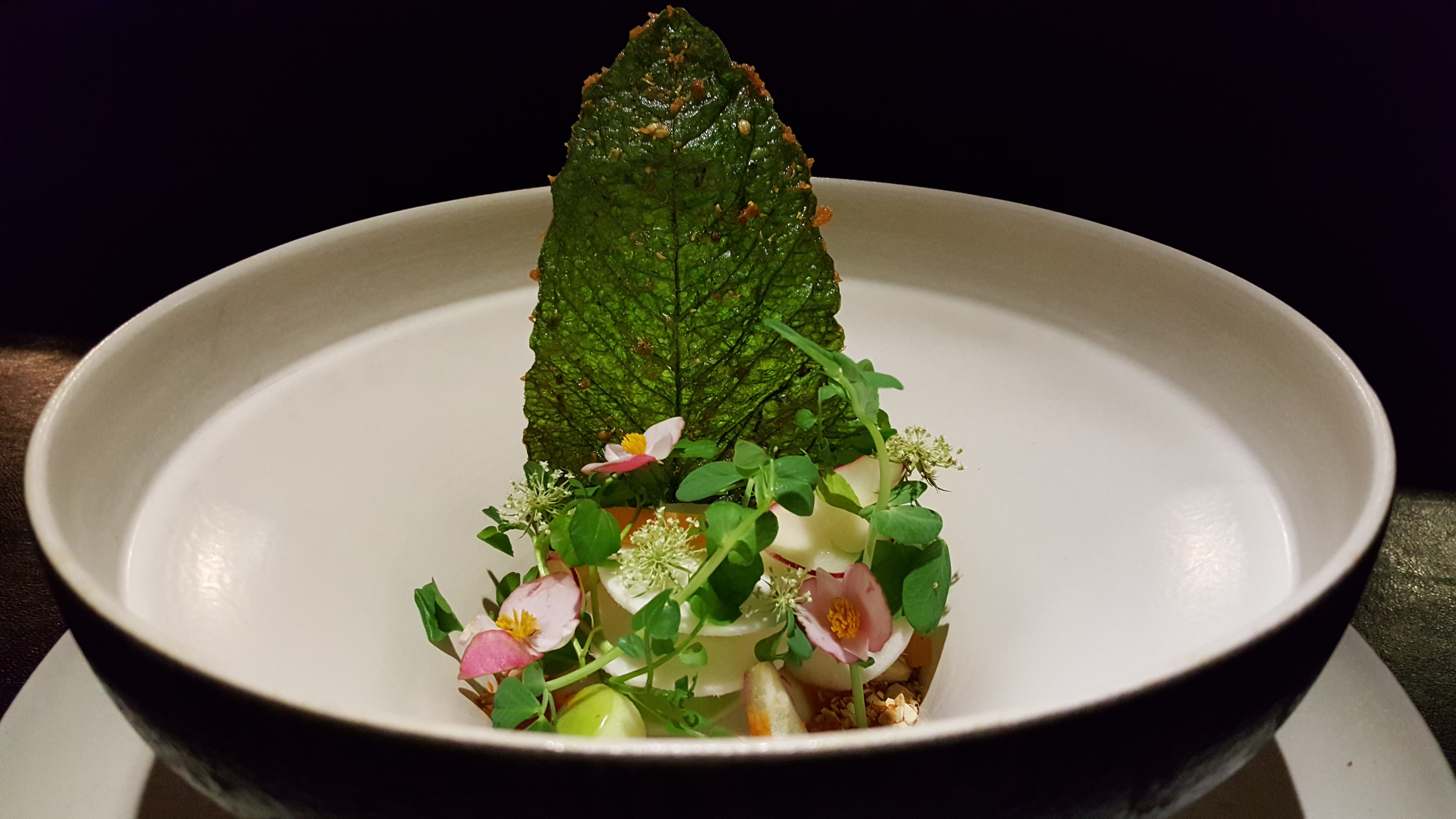 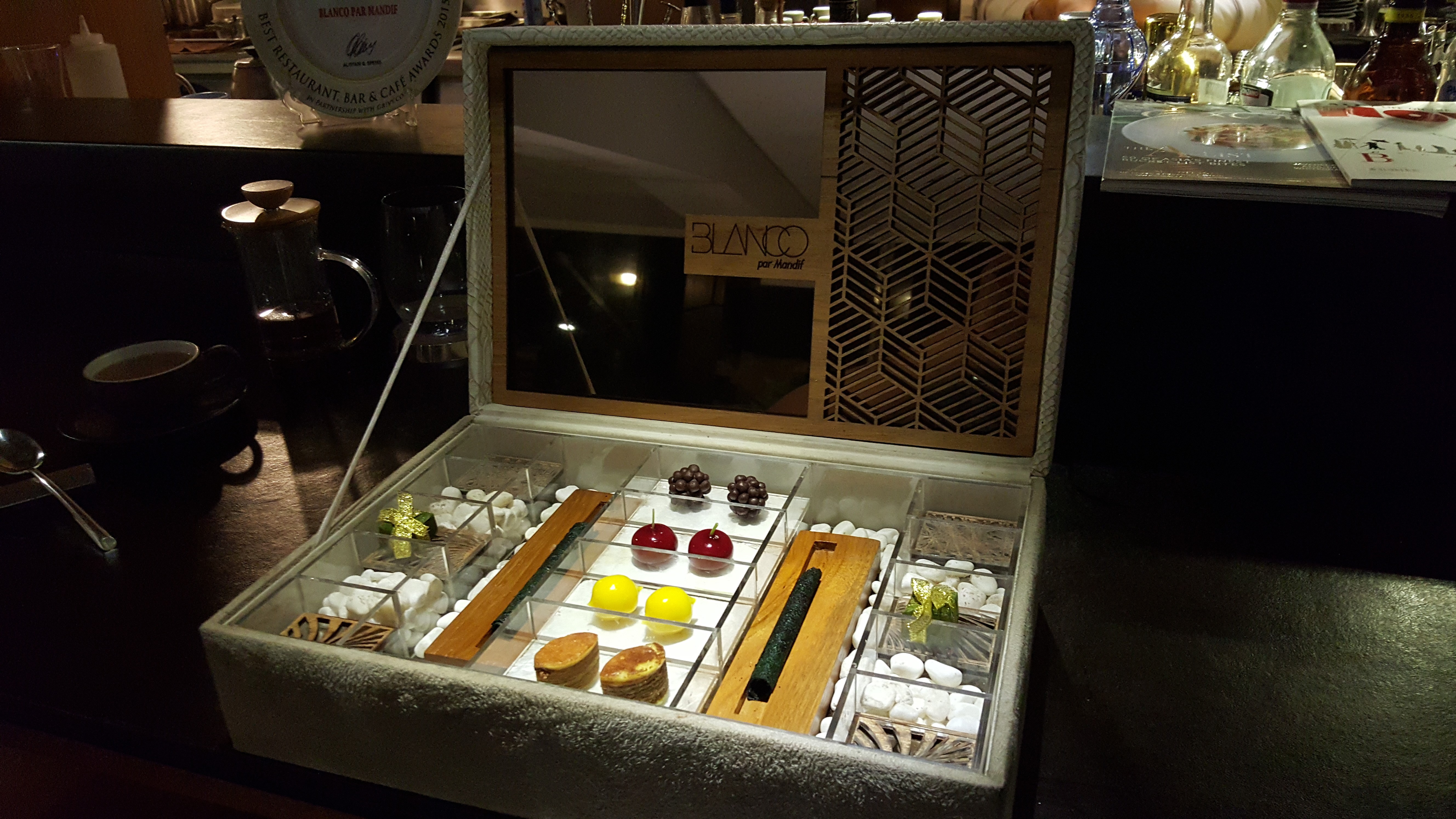 The next morning we tookÂ a silversmithing class. We all designed and craftedÂ unique designs (with the help of the actual smith) and were happy with the way they turned out. 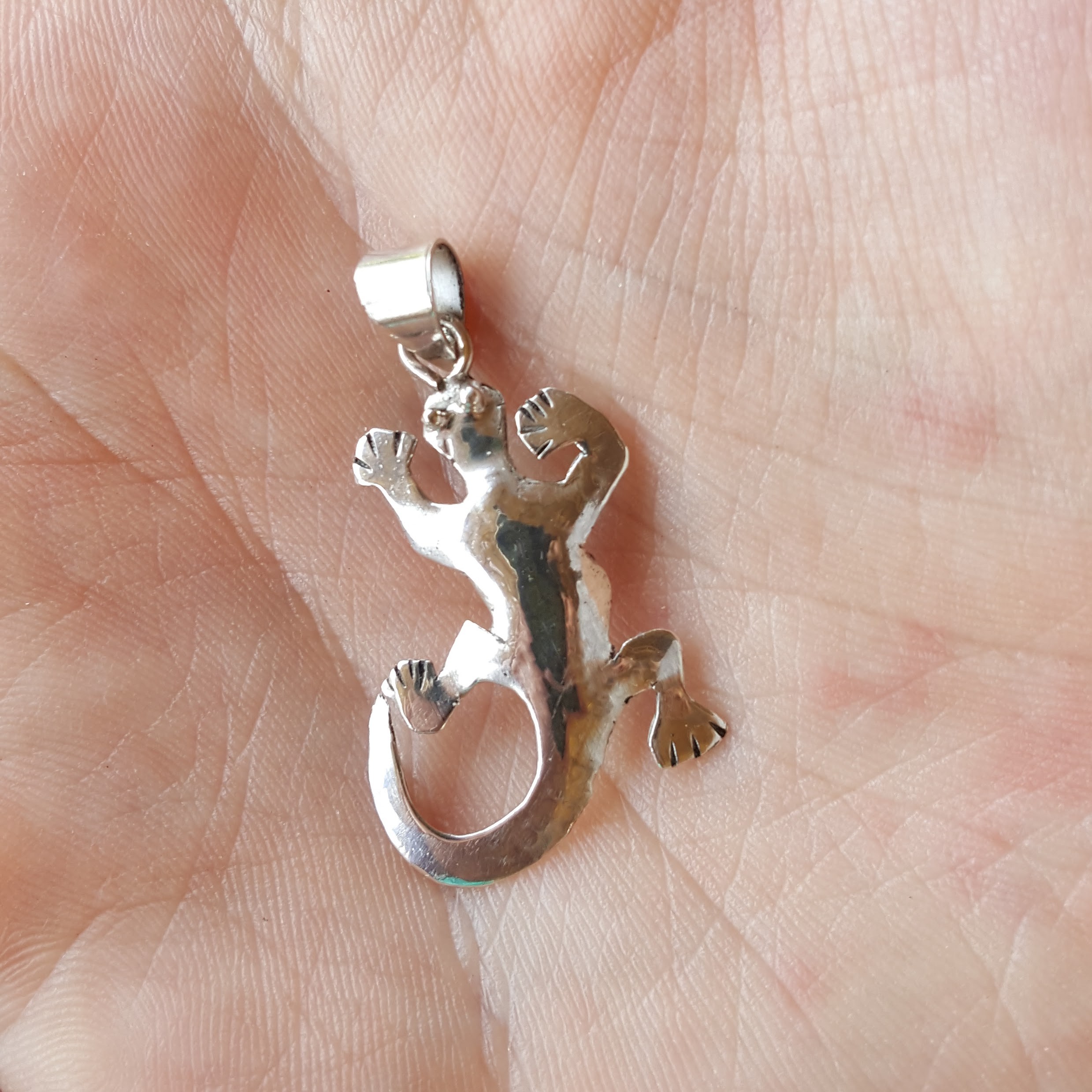 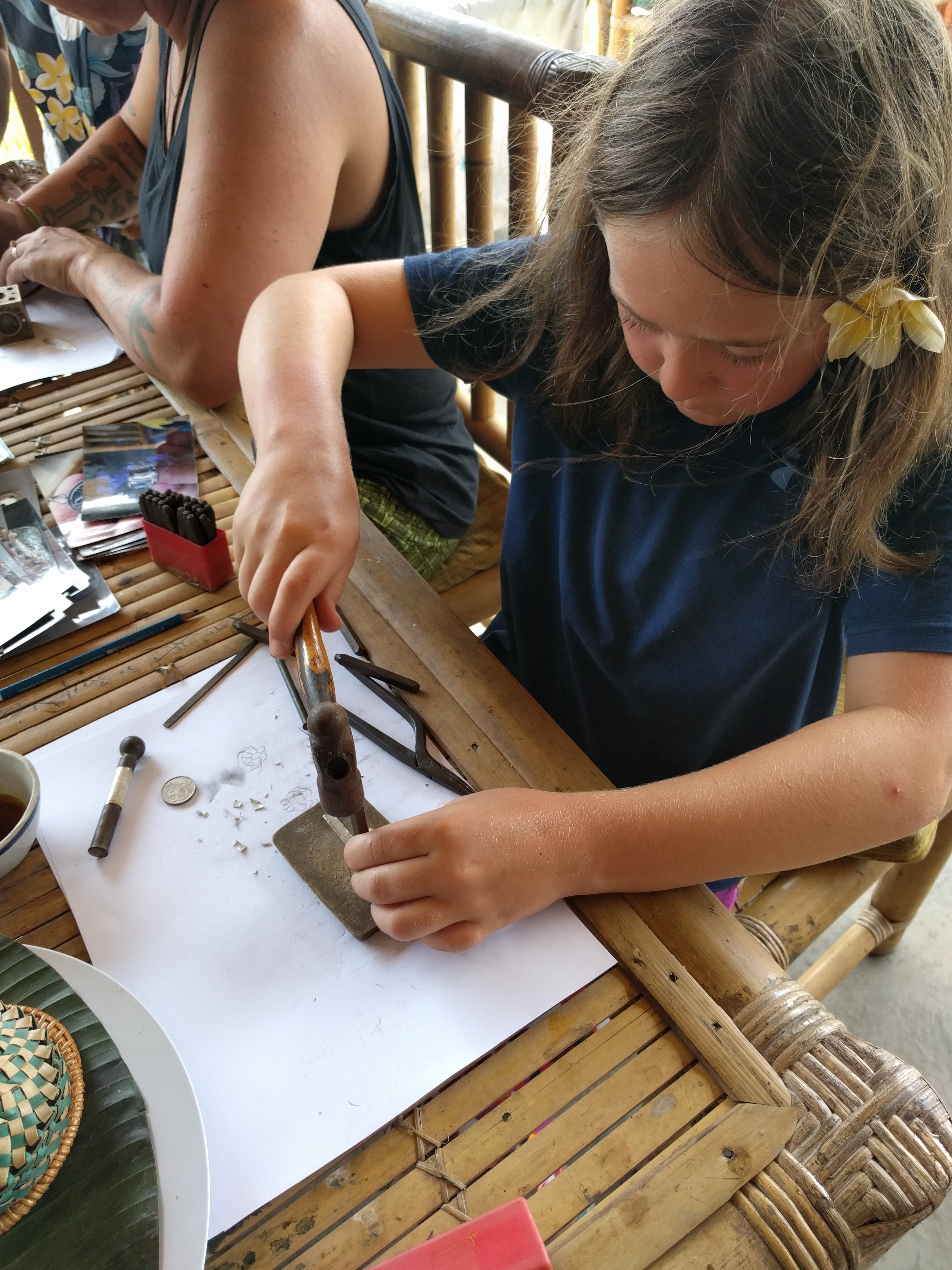 Finally, we couldn’t leave Ubud without seeing a Kecak performance: a retelling of the Ramayana in dance accompanied by dozens of men singing and making percussive noises. This was one of Kate’s favorite experiences from her last time in Indonesia, and I agreed that it was very special.

Indonesia was one of our longest stays in a country, but I felt like we just scratched the surface of what it has to offer. We’d love to go back.